Spring is here and with it comes a spark of freshness. Newness.  The long, cold winter has faded from our memory (at least for some of us) and we look to the colorful spring to fill us with the hopefulness of warmer and brighter days. However spring isn’t just about young and supple flowers and the trees bursting forth with new foliage. This season is about the commencement of another six-plus months of ash and maple tree trunks being flung into the speeding paths of horsehide-covered rubber. The sounds of snapping leather and cracking wood are pronounced on sand lots and stadiums across the country as March rolls into April. It seems that nothing, not even war, can get in the way of baseball.

With the advent of free agency and sports talk radio, baseball’s off-season has been virtually eliminated for the fans of the game. For baseball memorabilia collectors, off seasons are only measured by the distances between paydays and the cache of available…cash with which to acquire the next collectible. For collectors (like me) who are much more interested in the extremely finite military baseball genre, the off-season can be varying due to the increasingly limited number of available pieces which we pursue.

For me, the off-season has been more of a spectator sport as I witnessed two vintage military baseball uniforms listed at auction (online) only to pass by virtually unnoticed, only to be re-listed with incrementally decreasing opening bid amounts with each iteration. Had the timing been more in line with my budget, one (or both) would have found their way into my meager collection. In addition to the two listings I was focusing on, there were several uniforms (all USMC baseball uniform sets and jerseys from an array of eras)  that seemed to be gobbled up by hungry collectors. These uniform listings (and sales) were entertaining to watch though I had no committed interest.

Unlike the WWII USMC baseball jerseys of similar design, this one has a MacGregor manufacturer’s tag (source: eBay image).

The first real gem that caught my attention was a late 1950s road gray baseball jersey from an engineer group that appeared (due to the “116” numerals on the left sleeve) to be part of the 116th Infantry Regiment. The appointments of the jersey were very similar to those of the road gray USMC jersey in my collection. The aside from the lettering on the front and sleeve, the differences between the two are the thickness of the soutache and the presence of a manufacturer’s tag (the USMC jerseys are limited to a size tag). The Engineers Group jersey also lacks the color-matched button (aligned over the “I”) – which isn’t required due to the alignment with the lettering. With this auction listing ending only a few short weeks following the Christmas shopping season and the damage my financial resources sustained, I had to let the auction pass me by (for more details, see the 116th Infantry Engineers Group jersey on the Archive of Military Baseball Uniforms and Jerseys.

This auction generated a fair amount of interest when it was listed for $79 at auction – selling for less that $150. The uniform appears to date from the 1920s (source: eBay image).

The tag in this jersey indicates that it was made prior to 1925 when the company name changed to Wilson-Western Sporting Goods (source: eBay image).

The U.S. Navy maintained a base in Pago Pago, American Samoa from 1899 to 1951. The lettering across the chest seems to indicate that the jersey was used by naval servicemen during the 1920s in Samoa (source: eBay image).

More recently, a very intriguing baseball uniform online auction listing made its way through the e-bidding circuit having been listed and re-listed several times before it finally sold. Clearly an early piece, the jersey was constructed with long sleeves and a collar and sported dark blue pinstripes. The styling is consistent with uniforms of the 1920s. The seller’s supposition that the “SAMOA” lettering sewn across the chest correlates to a U.S. Navy team (consisting of active duty personnel stationed at the Navy base in American Samoa). One can certainly deduce that the jersey is indeed military, but there is no hard evidence to prove or disprove this idea.

I’ve scoured my resources in search of any information regarding a Samoa team connected to U.S. naval station at Pago Pago. This photo postcard of the 1918 U.S. Navy team from Guam shows uniforms that clearly pre-date the Samoa jersey. Note the full-collared jerseys and the stovepipe ball caps.

Burleigh Grimes’ 1926 Brooklyn jersey sold for more than $31,000 in a 2004 auction. This design is very similar to the “U.S. Navy” Samoa jersey (source: Robert Edward Auctions).

The “Samoa” jersey certainly possesses features and design elements that lend credibility to the idea that the jersey is authentic and for a sub-$100 investment, it would be well-worth the risk.

“The One Constant Through all the Years…has been Baseball”

“The one constant through all the years, Ray, has been baseball. America has rolled by like an army of steamrollers. It’s been erased like a blackboard, rebuilt, and erased again. But baseball has marked the time. This field, this game, is a part of our past, Ray. It reminds us of all that once was good, and that could be again. Oh people will come, Ray.

People will most definitely come” –Terrence Mann – “Field of Dreams”

Over the course of the 2013 National Football League season, I was captivated by the successful run made by my team, the Seattle Seahawks, champions of Super Bowl XLVIII. I didn’t miss a single game as I was captivated with each win and by all of the individual stories that flooded the local media about the players and the fans. It has never been more evident that the NFL and the Seattle Seahawks represent today’s national pastime. However, I must confess that I am still, first and foremost, a fan of baseball. No other American sport has such a storied history and consistent, lasting traditions. No other professional sport has filled the ranks of the U.S. armed forces to the extent that major and minor league baseball has.

At the war’s outset, several of the game’s greats headed to recruiting offices to enlist (in response to the Dec. 7, 1941 Imperial Japanese sneak attack on Pearl Harbor) prompting Major League Baseball commissioner, Kenesaw Mountain Landis to seek guidance from President Roosevelt as to whether to suspend play until the end of the war. In FDR’s (January 15, 1942) reply, he wrote “I honestly feel that it would be best for the country to keep baseball going. There will be fewer people unemployed and everybody will work longer hours and harder than ever before. And that means that they ought to have a chance for recreation and for taking their minds off their work even more than before.” 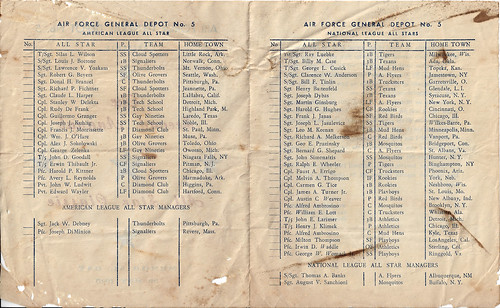 Program for the Air Force General Depot No. 5 All Star Classic held on 30 May 1945. Pages 2-3 showing the rosters of the All Stars.

Throughout the war, the ranks continued to swell with men who traded their flannels and spikes for OD green and navy blue regardless if they were the games biggest stars or utility players from class “D” ball. Baseball historian Gary Bedingfield lists (on his Baseball in Wartime site) more than 1,360 (known) professional ballplayers who served in the armed forces during World War II.

For a collector like me, the crossover collecting – joining baseball and military history together – adds such a enjoyable aspect to the pursuit both common and unusual artifacts. Some of my most recent baseball militaria acquisitions are in the realm of ephemera (one piece) and vintage photographs (three images) and, though I haven’t started to, pose some interesting research challenges in determining who (if any) might have suited up at the professional level before or after the war.

One (recently pulled) online auction for a set of eight autographed baseballs was the stuff of dreams for a collector like me. However, being on a shoestring budget, the asking price was well outside of my financial means and I had to watch it go unsold though the progressively improved with each re-listing of the item. The signatures on each ball had been obtained by a man who umpired service games in Hawaii in 1945. Each ball was filled with autographs from major and minor league stars (some future Hall of Famers) and had been part of a larger lot of balls from a 2008 estate sale.

In the past few months, I have observed a few auction listings for service team uniforms, specifically USMC, that were in considerably bad condition and yet sold for more than I paid for my pristine uniform set, demonstrating that I am not the only collector interested in the baseball-military connection. I do love to wear a jersey on occasion and fortunately for me, I was able to obtain a beautifully-made wool flannel replica of my 1940s Marines baseball jersey. My original is now safe from me potentially failing to keep it safely tucked away in my collection. 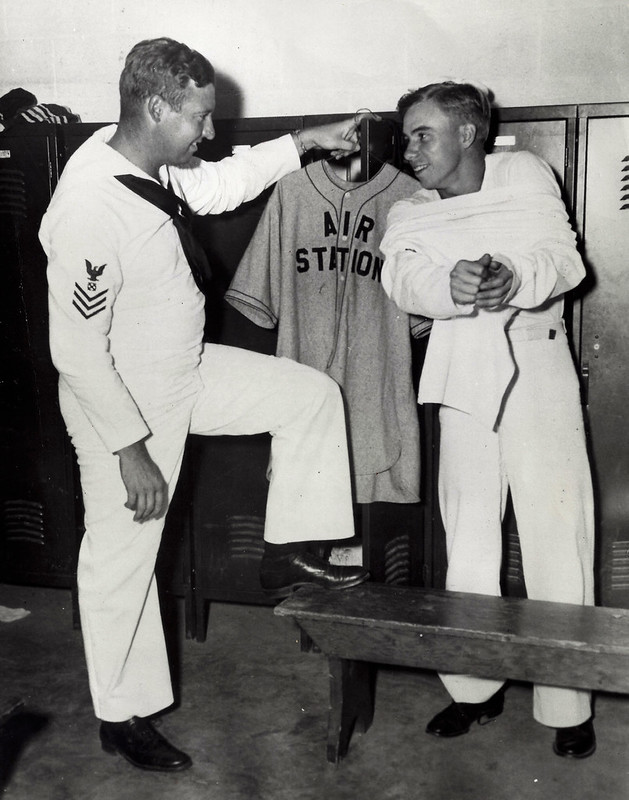 Another recent acquisition for me is this September 11, 1943 image. The original Associated Press caption attached to back reads: “Hugh Casey (left), former Brooklyn pitcher, and Pee Wee Reese, former Brooklyn shortstop, wear different uniforms now but are still playing top notch ball. They are the nucleus for a service team at the Naval Air Station, Norfolk, VA.”

In conducting a few online searches for baseball-related militaria, I could easily spend a few hundred dollars and have a small collection of items that would provide significant enhancement (to my existing collection) and help to tell the story of the indelible impact that the game has had on our service members, especially in time of war.

“From the frozen tundra of Iceland to the jungles of the South Pacific; from the deserts of North Africa to the Nazi stadium in Nuremberg, American soldiers, sailors, airmen and Marines played baseball whenever, and wherever, they could.” – James C. Roberts

Dating from the Civil War through to present day, baseball has been constant and unchanging, especially for our service men and women. The game is a part of the American past, present and hopefully for the future and collectors will be there to preserve that history.