Now that the Major League Baseball Hall of Fame Class of 2017 has been announced and the debates are raging on about which of the elected are truly worthy over those who were once again overlooked, I am looking forward to the upcoming season, hopeful for the Dodgers to overcome last season’s playoff fade. The Dodgers have won the last four consecutive NL West flags and have two NLCS and two NLDS defeats to show for their efforts. Fortunately, I can fall back upon my military baseball collecting where there are both victories and defeats and yet no off-season.

Until recently, I have focused attention on acquiring photographs with a keen eye trained for uniforms to add to my collection. I have been selective, landing some vintage photos from as early as prior to WWI and into WWII, a WWII-era Hillerich and Bradsby bat (stamped U.S. Navy) and a few other assorted pieces.

One piece that I landed a few years ago caught my eye due to its uniqueness and that I hadn’t seen anything like it before (or since). Not being very in tune with the service academy athletics (beyond attending college football games that included West Point and the Air Force Academy teams and watching the annual Army/Navy football game on television) or the history as it pertains to baseball, I took particular interest in what the seller described as an athletic varsity letter (think: letterman’s jacket) for baseball from the Naval Academy in 1944. The seller had two listings: one for the letter and the other for the 1944 Lucky Bag (Annapolis’ yearbook) from the naval officer for whom the letter was awarded.  Landing this letter caused me to pay closer attention to anything that might be related to baseball within the service academies.

Not long ago, I spotted an auction listing that was very unusual and a departure from my typical baseball memorabilia. The listing mentioned a medal that was awarded to a naval officer (at the time, a midshipman) who also was the recipient of three Navy Cross and one Army Distinguished Service Cross medals. This particular medal was engraved with the sailor’s name and the date that it was presented to him and was more in keeping with a sports trophy than a medal awarded for valor or esteemed service in uniform.

The 1925 Naval Academy Ball Club – Frank Fenno is pictured in the back row, 4th from left.

Frank Wesley Fenno, Jr.  came to the Naval Academy with aspirations of playing professional baseball. Fenneo’s classmates wrote of him in The Lucky Bag (Annapolis’ annual), “His life’s ambition was to play baseball, and when he didn’t get in a game, it was owing to academic interference. Center field was his position and when the little pill landed in that territory, it didn’t have a chance (a warped sense of modesty prevents our telling about that home run in the Army-Navy Game).” During his years there, Frank had a reputation for both his prowess in the outfield and consistency with his bat, as further noted in The Lucky Bag, “In the outfield Fenno, Leslie, and Ward appeared to be the strongest combination. Fenno, our 1925 captain, got anything that came within the range of possibility, and all three men were handy with the stick.”

The Navy Athletics Association medal and box. This was made by the Department of Insignia of the Bailey, Banks and Biddle company.

The medal, presented to Midshipmen Fenno in 1924 by the Naval Academy’s Navy Atheletic Association in recognition of his .410 batting average for his junior year baseball season. Fenno would letter in the sport for all four years before graduating and being commissioned as an ensign in 1925. Admiral Fenno would have an illustrious career as a submariner receiving the Navy’s second highest valor award (subordinate to the Medal of Honor) three times during World War II. He also received the Army’s second highest award during his WWII service. In later years, the Admiral served as the chief of staff at the United States Taiwan Defense Command where his love for the game would continue:

“I’ve been looking through your website and came across a list of Chiefs of Staff for USTDC.  I was there as a photographer from 1955 to 1956 and remember that Rear Admiral Frank. W. Fenno Jr. was the Chief of Staff under Vice Admiral Stewart H. Ingersoll, the first Commander of USTDC.  Since Rear Admiral Fenno is not listed, his picture is attached along with a photo of him shipping over (re-enlisting) four of the photo lab staff in August 1956.  Admiral Fenno also played on the TDC softball team.”  (source: US TDC Blog) 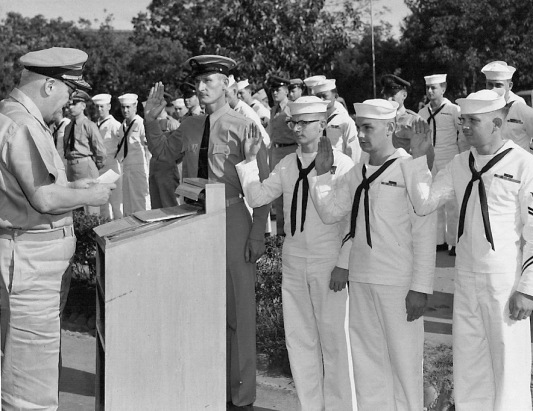 I will sheepishly admit to bidding on the medal with no prior knowledge of the admiral nor these types of medals, beating out six other bidders. In communicating with the seller in trying to obtain any provenance and history as to how he obtained the medal, I learned that this it was most-likely sold some time after his other decorations were either sold or donated.

This piece checked a lot of militaria boxes in that it was engraved with the veteran’s name, had reasonable provenance and it was directly dated. When the medal arrived, it was in its original Bailey, Banks & Biddle box (though the it is a little worn). The pendant, ribbon and clasp are all in excellent condition though the metal surfaces show some reasonable tarnish.