One of the areas I spend time focusing my collecting in is with the navy enlisted rating insignia. For those of you who are neck-deep strictly in baseball memorabilia collecting, rating insignia are the embroidered badges that are affixed to the left sleeve of the navy enlisted uniform and indicate the individual sailor’s job specialty and his or her pay-grade.  I have been collecting this embroidery since I joined the Navy more than 30 years ago – by default, I purchased multiple rating insignia when I was promoted so that I would have enough on hand for all of my uniforms. Once I got out of the service, I merely stored all of my uniforms and accouterments, thereby inadvertently starting my rating badge collection. 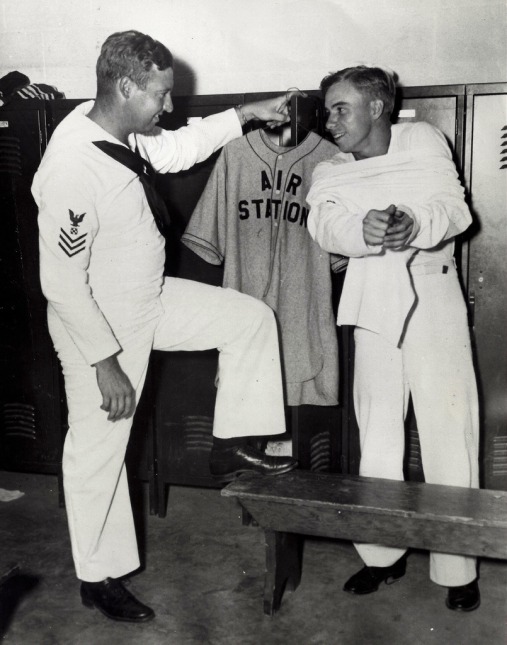 When I started to specialize in the older badges (the most recently made rating badges in my collection dating to World War II), I focused on some specific ratings due to their history or correlation to the job that I held when I served. It was around this time that I began to pay more attention to baseball in the armed forces and the close link shared between the two (dating as far back as the American Civil War), especially in terms of collecting. I recalled years ago when I met a few of the game’s legends (specifically, Bob Feller and Duke Snider) and that I had the opportunity to talk about our common experience in serving in the U.S. Navy. I took stock of the autographs that I have obtained and noted that I had signatures from other major leaguers who also had served. 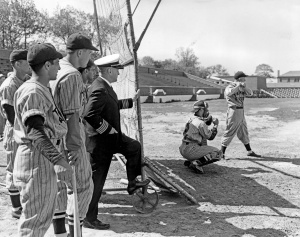 When the U.S. was catapulted into World War II, the Navy was not prepared to fully manage the influx of volunteers that began to respond to the attack by rushing to recruiting stations around the country. The Navy Department had been engaged in new ship construction and modernization of the fleet as war raged in Europe and the far east.  So, too was the anticipation of the swelling of the  Navy’s ranks. In a November 21, 1941 letter from the Chief of the Bureau of Navigation (responsible for personnel management) to create an undefined specialist rating (to provide new enlisted ratings that would be needed in wartime but didn’t fall within the established navy enlisted rating structure) to accommodate the needs (though it is unknown the actual date the rating was created). When it was established, the first four specialists — designated on the rating badge the letters A, I, S and P, bordered by a diamond outline — were authorized in February 1942. Specialists could be appointed directly from civilian life to any petty officer grade depending upon their skill level.

Cleveland Indians pitching ace, Bob Feller had been in the league for nearly six years by the end of the 1941 season. When the Japanese attacked Pearl Harbor on December 7th, he was driving from his home to meet with the Indians management to discuss his new contract for the 1942 season hearing of the attack on his car radio while en route and felt compelled to serve, instead. 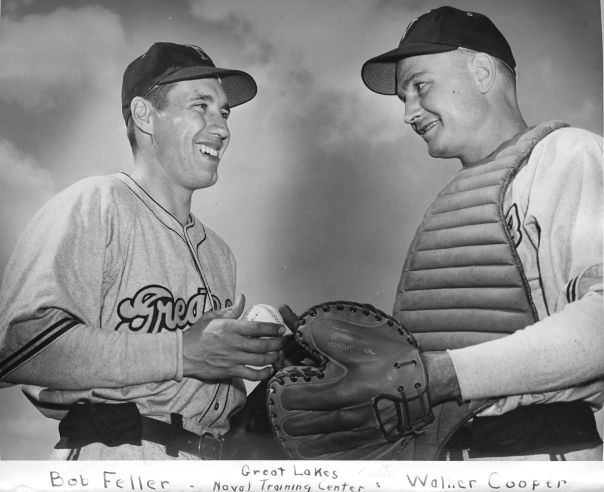 Looking back fondly on his naval service, Feller talked of when he enlisted, “After my basic training, the Navy made me a chief petty officer and assigned me as a physical training instructor (the insignia as denoted with an “A” in the center of a diamond – one of the Navy’s new specialist ratings). It was valuable in its way, but I wanted to go into combat. I’d had a lot of experience with guns as a kid, so I applied for gunnery school and sea duty. After four months of naval gunnery school in Newport, Rhode Island, I was assigned to a battleship, the USS Alabama (BB-60), as a gun-captain on a 40-mm antiaircraft mount that had a crew of 24.”

After serving in combat aboard the Alabama, Feller was sent to the Great Lakes naval training center in March of 1945 where he played for and managed the base’s ball club until the end of the war. 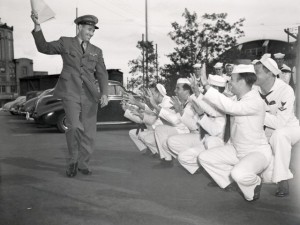 Harold “Pee Wee” Reese of the Brooklyn Dodgers was a rising star for the club’s middle infield as a short stop having just finished his third season and first as an All Star in late 1942. With WWII fully raging in both theaters, the twenty-four-year-old Dodger enlisted and was accepted into the Navy on January 18, 1943 to serve, like Feller, as a physical training instructor. Reese would spend much of his time in this capacity both domestically (commencing with his first duty station at the Norfolk, VA navy base) and in the South Pacific (with the Sea Bees).

Specialist “A” rating badges while not rare are still somewhat difficult to locate. If you are seeking to add any of the specialist badges to your collection, be prepared to pay as much as $40-50 depending upon the rate (petty officer 3/c to chief petty officer). I have seen both the dress blue and dress white variants. It is possible that there are some reproductions being passed due to the higher prices these rating badges command so pay attention to the embroidery work and the patterns used for the eagle.

Specialist “A” rating badge (athletic instructor) for a third class petty officer. This was applied to the dress/undress white uniform and dates from World War II. Note the reverse and the extra material folded and stitched flat as it was cut down to conceal the other chevrons. All rating badges typically are made as first class and cut to meet the rate (rank) of the sailor.

Specialist “A” 2/c rating badge for dress whites. Both chevrons are sewn onto the backing material while the “crow” and insignia are directly embroidered which dates this rating badge to World War II.

This dress blue Specialist “A” rating badge was used for the Navy’s Athletic Instructor specialist rating from 1942-1944 then as the Physical Training Instructor from 1944-1948.

Note that this Specialist “A” CPO rating badge is fully embroidered which would typically date this as a post-war example. Earlier examples would typically have wool chevrons sewn onto the base material.