Progression From Cards to Photos; Seeking Imagery of those with Service

The reverse of Snider’s ’56 has no mention of his military service.

Many years ago, before I discovered the enjoyment of gathering and researching baseball artifacts that were used by ball-playing service members, I was very interested in baseball cards from the 1950s and early 1960s. For some reason, I was taken by the 1956 Topps cards in particular due to the landscape-orientation of the images and the hand-tinting of the players’ photograph and the “comic strip” artwork and factoids that were presented on the card backs (above the individual’s playing stats which included the previous season and the career totals). Even at that time, these cards were already highly collectible and commanded significantly higher prices than their contemporary counterparts. Nevertheless, I decided that I wanted to take a more “affordable” approach and collect the cards of the Brooklyn Dodgers as that team was the reigning world champion and whose roster was still stocked with the core players who helped bring their organization its very first title (and last, in that city). 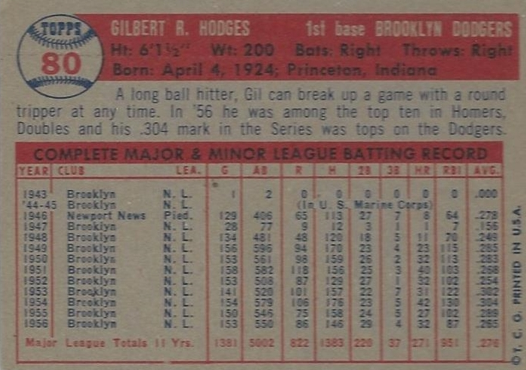 The 1957 Topps card for Gil Hodges shows his service in the Marine Corps in 1944-45 before resuming his career with the Dodgers after the war.

While pursuing the ’56 Brooklyn set, I began widen my interests for certain players and purchased their cards from other years (cards issued previous and subsequent to 1956).  When I landed a few players’ cards from the 1957 Topps set, I noticed that the player’s statistics encompassed their full career, broken out by each year on separate lines and totaled at the bottom. Though I owned a Major League Baseball (MLB) Encyclopedia and was thoroughly familiar with many of my favorite players’ career statistics, it wasn’t until I held a card in my hand that a particular statistic stood out to me. In 1957, Gilbert “Gil” Raymond Hodges played a single game of major league baseball with the Brooklyn Dodgers in 1943 which was reflected by a single line; he had only two at-bats* and did not get a hit. For the next two seasons, his ’57 card lists that though he was still a Brooklyn Dodgers player, he did not play for the team as he was “In U.S. Marine Corps.” As I looked through other cards, I saw similar statistics for other players. Dodgers Hall of Fame shortstop, Harold “Pee Wee” Reese had the same information though he was “In U.S. Navy” but he had three previous seasons in a Dodgers uniform. When I began to pay attention to the information pertaining to players’ service during the war, I was past the mid-way point of my own military career.

My interest in collecting baseball memorabilia waned after the 1994 strike shortened the season and for the first time in MLB history, stripped fans of a World Series (which was ultimately cancelled). Admittedly, I was excited by the Seattle Mariners magical 1995 season and their first appearance into the playoffs and being there for their clinching game of the American League Division Series followed by Game 1 of the Mariners’ first American League Championship Series. Despite the excitement that I personally experienced, I still discontinued all collecting interests until I was reignited with a passion for military history more than a decade later.

Fast forward to 2009-2010 when I acquired my first military baseball artifact (a 1943-44 Marine Corps red-trimmed, road gray wool flannel baseball uniform) which re-ignited my baseball collecting interest, focusing entirely upon those who served in the armed forces and played the game. Not long after obtaining the first uniform, I discovered a second Marines jersey (made of red-canvas, yellow-trimmed from the same WWII-period) that I added to my collection. I recalled one of my favorite players (the aforementioned Gil Hodges) and that he served in the Marines during WWII and couldn’t help but imagine him wearing one of the two uniforms that I had in my collection. When I started searching the internet in hopes of locating any photographs of him during the war, I stumbled upon auction listings photos of Marines wearing baseball uniforms. I began to pursue and started collecting these and similar vintage photos of service members playing the game, posed in team settings or just having a catch while away from the hazardous duties of armed conflict. 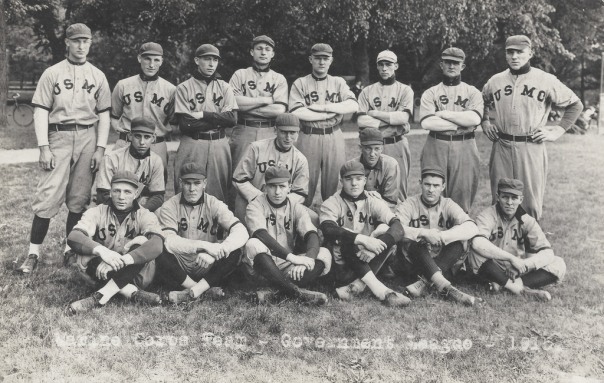 This is most-likely a domestic USMC team that played in the Government League in 1915.

Regardless of the branch of service, I continued to expand my collection of uniforms, ephemera (such as scorecards and programs from service team games) and photographs. After several years of collecting, I am seeing an unintended trend within my collection. The majority of my pieces are Marine Corps-centric which is somewhat humorous considering my naval service and the nature of the intra-service rivalry (and brotherhood) shared between personnel within both branches. Aside from the two iterations of the jerseys/uniforms previously mentioned, I subsequently located a third wartime USMC jersey and two Marines ball caps. The photos that have found their way into my collection date as far back as 1915 (some in Latin America) through China in the 1920s and 30s and into World War II.

Some speculate that the Marines introduced the game to the locals while they were in country on Santo Domingo in 1916. If they didn’t bring the game there, the Marines certainly influenced the locals with their own gameplay.

Collecting vintage photography can be both rewarding and frustrating. When one can connect an unidentified photograph to a location, time or event, shedding new light on history brings a measure of satisfaction, especially when the photo has never been seen by the public. However, when photos lack any means of identification, they are relegated to merely being an enjoyable, visual artifact. A few of my images were sourced from a veteran’s scrapbook (no doubt, broken apart to maximize the picker’s profits) that after two years of attempting to locate any sort of context, I was able to discover that the game depicted in the images was played by the visiting U.S. Marines in 1943 in Wellington, New Zealand.

The inscription of on this photo stated this game was played in China in 1935. Note the band seated behind the backstop as the Marine batter swings at the pitch.

Another image of a 1935 USMC game (perhaps a different perspective of the same game as the previous image).

One on base being held by the defense during the 1943 USMC game played to a packed crowd in Wellington, New Zealand.

The three photos of this group from a Marine Corps veteran each had some form of inscription. This one reads. “(l to r) Bob Richards, pitcher; Jim Bryant, catcher; Bob Ryan” – Wellington 1943

In addition to veterans’ scrapbook and snapshot photos, I have added images that were taken by news photographers or public relations personnel for the purpose of sharing positive news to the home front to offset the lists of KIA/WIA/MIA that would dominate local newspapers during the war.  These images are typically larger images (some as large as 10-inches) were professionally enlarged (snapshots are normally tiny contact-prints) that are printed on glossy photo paper (specifically during the 1940s). While my photo archive is not extensive by any measure, it does provide a decent perspective on the historical depth of the intertwining of the game within the Marine Corps.

This team photo is inscribed “1916 Mare Island” which seems to align well with the uniforms’ design.

My card collection has been tucked away since the early-to-mid 1990s until the last few weeks when I dug the 1950s cards in light of the (“my”) Dodgers entry into the 2017 post-season and finally reaching the World Series. Connecting my two collections (military baseball and card collections) has only served to reveal to me that my early interests (card collecting) in the men who also served has transcended to my present collecting focus.

USMC intra-squad game held in 1945 on Okinawa. No other details or inscription was provide with this photograph leaving me with no idea if this was before during or after the cessation of combat activities on the island.

Thinking back to that set of 1956 Topps cards and the team that was fielded in the 1955 World Championship, it is difficult to imagine the challenging road each player took to get to that point in their professional careers, especially after seeing the horrors of war. Unlike today’s Dodgers roster that does not contain a single military veteran (which holds true for all of MLB), the 1955 World Champion-team from Brooklyn had the following members who also wore the uniform of their nation.

World Champion Dodgers who served in or during WWII:

Other 1955 Dodgers with Military Service:

*On the last game of the 1943 season against the Cincinnati Reds on Sunday, October 3rd, Gil Hodges had three plate appearances. He entered the game as a pinch hitter, eighth in the order, taking over for catcher Mickey Owen (who didn’t have a plate appearance). Hodges coaxed a walk from Cincinnati starting pitcher (and future Navy veteran) Johnny Vander Meer and he subsequently stole second base.