← Nothing To Write? I Think I’ll Just Restore a Vintage Bat, Instead
My First Baseball Militaria At-bat; I Lead-off with the Marine Corps →

Following the Horrors of Battle in the Pacific, Baseball was a Welcomed Respite 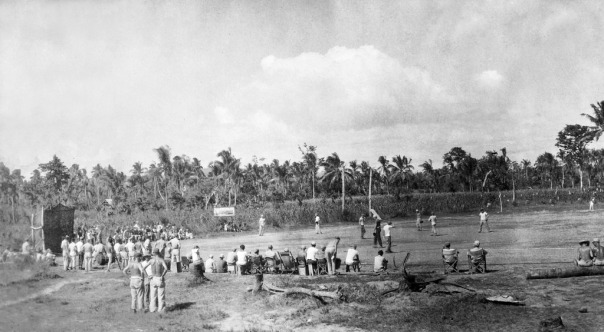 Over the past several years, I have managed to acquire several groups of photos – each of which was no doubt, removed from photo albums that had previously served as veterans’ reminders of their service during World War II. When the images arrive, my goal for them is to scan them and place them into archival storage and protect them from further deterioration as much as is possible. Once I have completed scanning the images (at the highest resolution that I am able to achieve), one of my main objectives is to work on the images to correct exposure, repair damage (rips, tears, scratches, etc.) leaving them suitable for use in future publication and print projects.

While personal cameras were fairly rare to be found aboard naval warships during WWII, many GIs in Army and Marine units managed to bring them in their gear. Obtaining film post-exposure processing and printing was even more difficult and often the service members waited until they were on R&R or even discharged to see how well their photographs turned out. Perhaps the most popular film size was 620 (which produced sizable negatives: 2-1/4 X 3-1/4″ with a Brownie Six-20 or a 6×9 cm negative with a Brownie Junior 620, two of the most common cameras in use at that time) during the War as noted by the size of the prints made from the negatives (the image is the same size as the negative) – which indicate that they were contact prints.

Scanning a contact print, even a small 2.25 x 2.25-inch, at a high resolution can yield incredible details  often revealing researchable information. My normal procedure, once I have completed my digital archiving process is to study each image and attempt to identify any information that will either support (or refute) the information provided or omitted by the seller when I acquired the photo(s).  I have been able to do this with several images that have landed into my archive.

With fourteen photos of these various games in this group (allegedly from one soldier’s photo album), there isn’t a single image that shows a unit insignia or any other distinguishing feature to help identify the location. This image appears to show men practicing for a game as the player at the plate is ready to receive the ball and make a tag on a base-runner.

Catching a Fly ball on the diamond at camp. Baseball uniforms were one the most difficult pieces of baseball equipment to acquire out near the front lines. These players (most-likely on New Guinea) have gloves, balls, bats and spikes but play the game in their dungarees.

Tying his Spikes. This un-named Army ball player appears to be using one of the glove from one of the other men pictured (Al Kosup) as the name is inscribed across the wrist strap of the glove.

The baskstop appears to be a rather makes-shift and is most-likely among the soldiers’ tents on New Guinea during WWII. Lacking flannels and protective gear or even a proper catcher’s mitt, this army ball player tracks a pop-up with his first baseman’s glove at the ready.

One of the baseball photo groups that I acquired in the last few years was listed by the seller as containing 14 allegedly images shot in New Guinea and the Philippines. I didn’t hold out any hope that the seller was accurate and purchased the images solely based upon the content of the of the images. When the package arrived, I took stock of photograph and saw that several had been inscribed, most likely by the veteran. Judging by the the terrain and surrounding flora, there is no reason to doubt the inscriptions (some are noted in New Guinea and others from the Philippines).

In searching for as to which unit these ball players might be from, I researched those that served in both New Guinea and in the Philippines. The insignia for those units are (left to right): 6th, 24th, 31st, 32nd, 33rd, 38th, 41st, 43rd and 93rd Infantry and the 1st Cavalry Divisions.

I scoured each image searching for a clue – anything that wold provide insight as to the unit(s) that the men in the images were assigned to. One of the images listed three troopers with their first and last names along with their hometowns. I was able to locate two of the three men but could not find anything beyond their enlistment information. I have been researching the other names inscribed on the photos and the results have been the same. What makes the research more challenging is that several of the guys listed have very common names and originate in hometowns with others who share the same name and also served.

This image only had the names of the ballplayers inscribed leaving the location in question. These men are listed as: Al Kosup of Fords, NJ; Paul Tovor of Bristol, Conn. and Pat Cacacie of Jersey City, N.J.

In this image (according to the inscription) are: Jack Hartman of Topeka, Kansas; Teddy Machjer of Worcester, Mass; Robert Smith of Binghamton, NY and Dick Gardner of Canton, Mass.

Sometimes what is obvious and stands out like a sore thumb is easily overlooked. As progressed with writing this article, I poured over the images one last time and…WOW!…there it was and on five separate posed photographs – a unit identification on a hand-painted sign. These men were most-likely members of the 20th Infantry Regiment (which was assigned to the 6th Infantry Division).  The sign tells of an upcoming “field day” athletic competition with the prize being seven cases of beer awarded to the victor in such events as football kicking, softball tossing, relays and three-legged races. The date of the competition was shown to be Friday, March 23rd (which was in 1945) when, when meshed with the 20th Infantry Regiment’s history, means that the unit was in the Philippines (the landed on Luzon, January 9, 1945). the 20th, known as “Sykes Regulars,” were in some of the heaviest and bloodiest fighting in the Philippines, though these images wouldn’t indicate that they were in the midst of 219 days of continuous combat (which would end on August 15, 1945). According to the unit history the 20th Infantry Regiment, along with other members of the 6th Division, was the most heavily engaged unit in the United States Army during WWII. 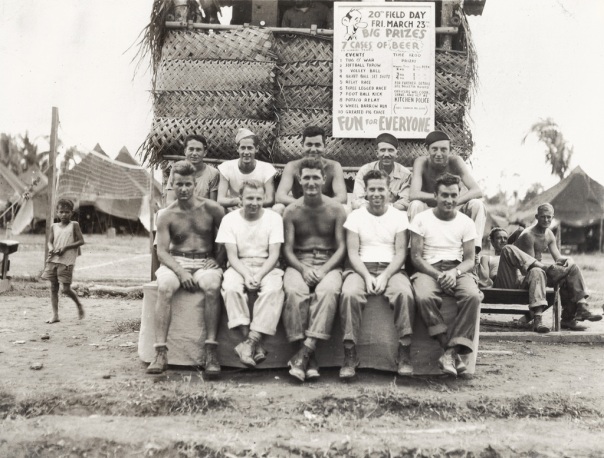 How I missed the obvious is beyond me. There on the sign, “20th Field Day” which refers to the 20th Infantry Regiment is very discernible in this and four other photos. The Field Day was held on Friday, March 23rd and the victors were due to receive “Big Prizes” such as “7 Cases of Beer.” Imagine how enjoyable that would be just weeks after fighting across “Purple Heart Valley” on Luzon.

Baseball was truly America’s national pastime in the 1940s and the game meant so much more to the servicemen (and women) who were away from home. There were substantial efforts undertaken by the major and minor league organizations to ensure that enough equipment was available to send to the troops both overseas and stationed domestically. Millions of baseballs, gloves, bats, catcher’s sets, spikes and uniforms were purchased (or handed down from professional clubs) to equip troops for the game. While many of my other photographs depict players in baseball flannels – some even had stunning satin uniforms – these uniforms were fairly difficult to obtain. Most troops were playing ball in their fatigues or dungarees during hours of respite following movement or even engagements with the enemy.

With time, effort and access to some more precise resources (and perhaps someone who recognizes a name or a face in one of the photographs), I might achieve a breakthrough in the coming months.  For now, I truly enjoy the images just for the content.

Resources:
History of the 20th Infantry; the “Sykes Regulars”

← Nothing To Write? I Think I’ll Just Restore a Vintage Bat, Instead
My First Baseball Militaria At-bat; I Lead-off with the Marine Corps →