← Despite the Auction Loss, Victory is Found in the Discovery
Game-Worn Baseball Caps of WWII: 3rd Air Force → 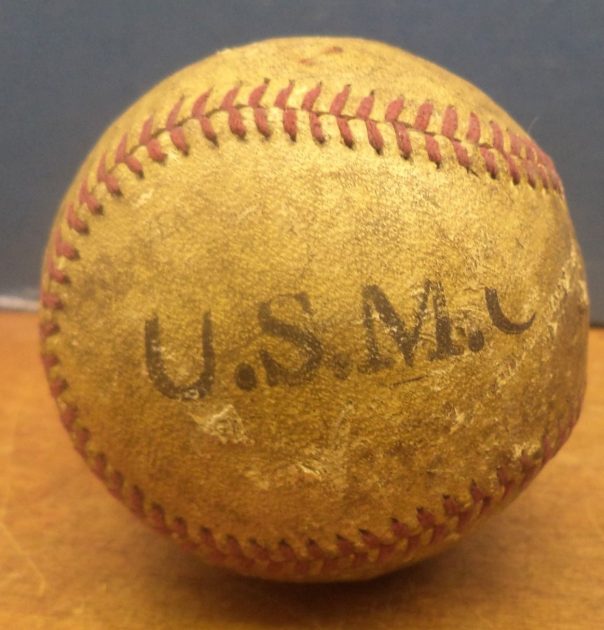 Taken at face value, this would appear to be a vintage, game-used baseball from the Marine Corps however, this ball is anything but a military-used item (source: eBay image).

Once again, fraud being perpetrated upon the unsuspecting collectors is pushing me to expose the deed and provide a measure of awareness for those who are unfamiliar with collecting baseball militaria. Online sellers, predominantly within the liar-laden sphere of auctions in what is known as eBay. Fraud and deception are so rampant and blatant that the company that facilitates criminals and deceivers also has in place a substantial program to thwart them after the transactions have been completed. With an item, such as the subject of this article is addressing, is listed for sale, it is incumbent upon the buyer to perform due diligence before pulling the trigger to bid or click the “buy it now” (BIN) button as the folks at eBay lack the expertise to discern fakes from real artifacts. 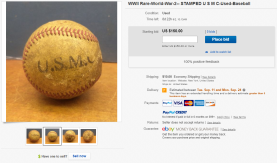 This screen grab of the auction shows the price gouging for the fake “USMC” baseball.

I have written several pieces regarding fraudulent military baseballs being sold online (see: Fake Military Baseballs) where I have covered many features that are consistent among faked balls. The sellers, hoping to capitalize upon the emotions of the prospective buyers by listing one of the most difficult-to-find artifacts from this time in baseball history, love to capitalize on the understanding that there are so few authentic items with which to perform comparative analysis. In the absence of genuine artifacts for verification, common sense should prevail as one analyzes the artifact using the details presented in the listing.

Light and dark scuffs seem to indicate that the ball has a combination of game play and then needed to have a second round of wear after the USMC stamp was applied (source: eBay image).

The presence of fresh markings (the lighter gouges amid the soiled scuffs and scrapes) indicate nefarious actions and deception (source: eBay image).

Fresh scuffs both above and beneath the USMC stamp are a great indicator that this ball is a complete fraud. (source: eBay image).

The latest example of a fraudulent military baseball is listed by a seller with nearly 5,000 transactions and 100% rating which certainly lends a certain measure of credence to the listing. However, one cannot rely solely upon the seller’s positive sales history to lend credibility any item that is listed. Not to disparage the seller and accuse them of intentional fraud as it is quite possible that the item was obtained from a reputable source.

The description indicates that the seller obtained the ball from a veteran’s estate. One can only assume that the ball was either given to the veteran or he purchased it from a source that was in the business of faking baseballs for profit. What the eBay seller is guilty of doing, at the very least, is perpetuating deception by pushing the bad ball back onto the market and validating it by associating the listing alongside his lengthy, credible sales history. 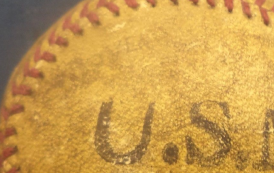 Remnants of the ball’s manufacturer’s stamp are faint through the staninging and wear leaving one to wonder how the “U.S.M.C” stamp fared so much better during the years (source: eBay image)?

As with all of the other faked examples that have been on the market over the last decade, this baseball does nothing to set itself apart from the fraud-field, aside from the use of “U. S. M. C.” stamped on one of the panels. On the surface, this might seem to be a legitimate mark as the unsuspecting buyer would assume that the Marine Corps applied this stamp to every piece of issued gear. In giving the benefit of doubt and accepting this marking at face-value, one would have to ignore that the baseball has two diverging planes of use and aging. In addition, the USMC stamp itself would not have made an appearance on the baseball as these were not “issued” by the Corps or sourced by the War Department for the military supply system.

Visible above (and to the left) of the USMC stamping are faint markings that are residual from the manufacturer’s marks (also stamped onto the baseball with an ink stamp) – though the mark is indistinguishable for identification purposes. Due to wear (either from game-use or synthetic as part of the faking process), the manufacturer’s mark is nearly eliminated which then calls into question the Marine Corps stamp. With such heavy usage and staining, how is the Marines stamp so vivid and showing very minimal wear? 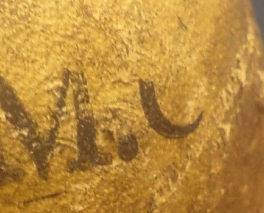 Not the crisp lines on the partial “C” in the stamping. Also note the recent wear marks that pass beneath the tail of the C indicating that the stamp was added after the aging (source: eBay image).

It is quite obvious that the USMC lettering was applied after most of the original wear. Aside from the aging (it has been roughed up after the stamp was applied), the stamp shows that it was applied twice, possibly in an attempt to obtain better coverage for the letter “C” while leaving a sloppy, unprofessional marking.

The issues with the ball are substantial and call into question the validity of the seller’s claims. Besides the concerns regarding the apparent synthetic aging and that there are no existing valid examples of any baseballs bearing the USMC marking, the seller’s actions displayed within the listing are enough to steer anyone away from submitting a bid.  Authentic military baseballs (such as those provided to the troops by the Professional Base Ball Fund that were marked accordingly) are valued in the $40-70 range, condition-dependent. This seller has this faked ball listed with a starting bid of $150. Along with the price gouging, the exorbitant shipping costs coupled with the seller’s no-returns policy are both red flags.

Had the ball been authentic, the $150 opening bid price is still far above what it should be for a military baseball. The seller is also gouging on the shipping ($10 for a baseball as is shown in this screenshot) however the red flag for this listing is that the seller does not accept returns. This policy alone is an indicator that he does not stand behind his claims.

It is difficult to determine where the deception lies with this auction listing. What is certain is that potential buyers need to perform their due diligence before they decide to pursue such purported artifacts – especially when they are as overly-priced as this one.  As an aside, I did reach out to the seller to provide the reasons supporting my recommendations that the auction listing be discontinued and the ball destroyed. Expecting to receive some sort of pushback in response to the message, I was surprised that the seller considered the information that I provided. In addition to the reasons that I listed in my message as to the why the ball is not genuine, I also recommended that it not be sold to prevent it from being used to defraud another interested party. The seller’s response was to merely reduce the opening bid amount by $100 and to cherry-pick some of the details from my email.

Upon learning and acknowledging that the baseball was a fake, the seller simply reduced the listing price from the original $150 and persisted in overcharging the shipping price.

Buyer Beware! The seller is knowinging selling a fake WWII USMC baseball and updated the listing’s description with snippets from my email that informed him of the issues with the baseball, choosing to sell the ball to an unsuspecting buyer who doesn’t read fine print.

← Despite the Auction Loss, Victory is Found in the Discovery
Game-Worn Baseball Caps of WWII: 3rd Air Force →