Four New Flannels Added to the Chevrons and Diamonds Archive

Judging by the traffic flow through this site, one of Chevrons and Diamonds most popular features for readers is the Archive of Military Baseball Uniforms. Since it was established with a dozen jerseys and uniforms (including those in our own collection), it has grown tremendously as we add pieces that surface (and, hopefully, we catch them when they are listed), capturing photos and researching their designs, features and the associated assertions or provenance regarding their history. As of publication of this article, there are currently 19 items, with at least one queued up to add to the line-up. It should be prefaced that the critical commentaries regarding the pricing employ a measure of supposition and assumption (coupled with a small dose of sarcasm) while not taking anything away from the sellers’ rights to ask what they deem necessary.

In the last two weeks, we have observed three noteworthy jerseys listed at (online) auctions and there is a noticeable, if not just a negative trend with the sellers’ valuations. In September of this years, that upward trend of listing prices with the spate of wartime and mid-century Marines jerseys was noted with our article, Marines Baseball: The Many. The Pricey. – all of those jerseys remain unsold and relisted week after week. In the past decade, jerseys used by the Marines are the overwhelmingly market-dominant artifacts within this arena which causes anything different to stand out.

This humble Navy jersey, though lacking provenance or attribution (to a named player) garnered respectable interest from collectors, achieving a final bid price at just over $200 (source: eBay image).

Aside from the scarcity of baseball uniforms from the U.S. Army Air Forces (or its predecessor, the U.S. Army Air Corps), U.S. Navy pieces are a rare breed among wartime flannels. Two weeks ago, as an auction for a WWII Navy jersey was nearing its closing, the bidding drove the price higher from its $9.99 opening bid amount.  After a ten-day run, the 21st and winning bid of $204.02 was a reasonable and sensible, considering the infrequency that any vintage Navy jerseys come to market. Among collectors in genre, the Navy jerseys that are on their wish lists are those that were used in the Pre-flight schools, used by the Norfolk area teams in 1942 to early 1943 and those that were on the Hawaiian and Pacific Island diamonds in late 1943 to late 1945. The Navy flannel in the recent listing was clearly not from any of these teams or games. Granted, the chances that one of those jerseys of having been game worn and used by a major leaguer are very good, but only one of them has surfaced in the last decade.

Reminiscent of the ridiculous asking prices of the aforementioned Marine Corps jerseys, not wanting them to be uniquely or alone in that sphere of insanity, the next two additions to the Chevrons and Diamonds archive, while they are quite fantastic pieces that would be fantastic additions to a military baseball collection, they are priced in a sphere well above reality. Both pieces were used by army personnel. one domestically and the other overseas, the sellers are either gouging and seeking to wait countless months, renewing their auctions repeatedly after the passage of each six-day segment without a bite – or – they simply do not understand the value of these items. Bear in mind that in recent months, there have been two 1940s (WWII-era) major league jerseys sold at auction, both worn by unknown players and have sold in the neighborhood of $200-$250. It is appropriate that these two jerseys, one from WWII and the other from the early 1950s and both from unknown players (most likely just average “Joes”) should be valued in the $75-100 range, when correctly compared with historic major league pieces.

Though this 1950s U.S. Army jersey from Wiesbaden, Germany is truly a beautiful piece, the asking price ($300) is about $220 above reality (source: eBay image).

Of the two Army jersey listings, one from the joint Army and USAF bases at Wiesbaden, Germany, is incorrectly listed as a World War II era piece. Since the War ended in 1945 and the base, a captured and converted Third Reich military facility, effectively began functioning as a U.S. base in 1946. While one might consider this fact a mere technicality, if the jersey was used in that or the immediately subsequent years, the features of the jersey itself give away the actual era (the 1950s). Listing the jersey as a buy-it-now with the price, $2 shy of $300, the seller is trolling for an ill-informed buyer (a sucker) who will bite on the fantastic design and excellent condition of the flannel. However, the seller left the door cracked for more astute buyers, indicating that a best offer will be accepted. Doubts remain as to the reasonable nature of an offer that would be deemed acceptable by the seller. Despite all of the pricing discussion, the jersey itself is a fantastic example of post-war design and the influence of the major leagues cascading down to the trenches of the military game. By the start of the 1955 season, the Dodgers was established as the dominant National League franchise, appearing in (and losing) five World Series since the end of WWII. The Wiesbaden Flyers jersey borrows many elements of Brooklyn’s uniform styling from this era, making it quite aesthetically appealing, though not for $298.00. As of publishing this article, the overpriced Wiesbaden jersey remains available. 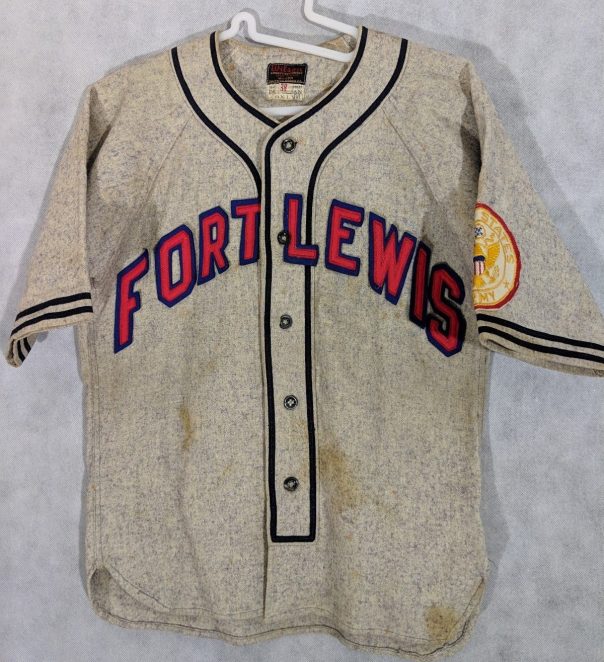 The signs of usage (stains, wear marks) don’t take anything away from what is a great piece of military baseball history. However, what makes this jersey wholly unappealing is the insane asking price ($600) that is $500 too high (source: eBay image).

Not to be outdone by mere pretenders, another seller recently listed a vintage, WWII-era jersey that, aside from the unrealistic market expectations, is an otherwise fantastic piece. Listed with a single purchase option, the $599.99 (at least one needn’t spend a full $600 on sale price! The buyer gets to keep that $0.01 in his or her bank accounts…save for the $12.90 shipping charge) is beyond ridiculous and has edged to the realm of insanity. The road gray flannel clearly dates from the 1940s and, based upon the design, its age places it more from the World War II-period. The two-color block lettering that presents the base-name (Fort Lewis) in an arc across the chest is stylistically representative of what can be seen in most World War II uniforms. Other features of the jersey includes the vintage U.S. Army logo patch on the sleeve and the chain stitching across the back which might be the basis for the seller’s exorbitant selling price. Rather than having a game-worn jersey from a player, for a penny under $600, one can acquire a jersey worn by the most legendary figure from the Fort Lewis baseball team; its mascot. The short window of time that this jersey was available has expired and the seller has not yet re-listed the piece.

It is almost a shame to show this jersey in the same company as the two previous Army flannels. This piece is the nothing short of being genuinely historic as it is connected to a legendary team that was one win away from winning the ETO World Series title (image source: Goldin Auctions).

The last of the new entries for the Chevrons and Diamonds uniform archive truly is a piece of history that, for obvious (to military baseball fans) reasons, garnered the interest and the considerable final bid amount. Aside from the articles published to this site, the 71st Infantry Division’s Red Circlers ball club was one of the legendary teams that reached the pinnacle of the European Theater of Operations (ETO) 100,000 players strong baseball league. Despite losing to the Overseas Invasion Service Expedition (OISE) All Stars in the championships, the squad from the 71st was noteworthy having a roster filled with talent from both the major and minor leagues. Adding to the collector interest is that both pieces in this uniform group are named (to two separate team members) along with rock-solid provenance. Rather than see this group lurking in the shadows of the often-times seedy breeding grounds of nefarious activities (known by the simpler name – eBay), this group was listed with a reputable auction house.