While Major League Baseball celebrates their 150th anniversary (which coincides with the establishment of the first all-professional baseball team in Cincinnati) on this 2019 opening day, 76 years ago a different opening day was taking place at a tiny and exclusive ball park, well inside of the secured confines of the Norfolk Naval Training Station in Norfolk, Virginia. Opening day in baseball is appropriately connected to the renewal of spring with the budding leaves of the deciduous trees and the impending blooms of perennials, daffodils and tulips. Rosters are renewed with player changes, season statistics are reset to zero and all teams are tied in the standings. In 1943, our nation’s armed forces were on the offensive in the Pacific and Northern Africa (days earlier, General Patton’s tank forces defeated General Jürgen von Arnim Afrika Korps at El Guettar, Tunisia).

A trend has been in development for the last few years in terms of the baseball militaria ephemera market in the last few years and while it has been a pleasant surprise, it gives me reason to suspect that there is an imbalance in this particular area of interest. Regardless of the explanations, it has been quite a pleasant turn of events after so many years with scant few pieces.

The very first military baseball program that I was able to secure into my collection was discovered just as my interest in baseball militaria was burgeoning. With just a few pieces already within the collection, the 1945 Third Army Championship Series scorecard and program grabbed my attention and I was able to win the auction with a very minimal bid. It seemed a fitting piece to pursue and though my knowledge surrounding the WWII service team games at the time. A tangible piece of baseball history that included names of some professional baseball players-turned-soldiers-turned-ball players was a great addition and just the beginning.

Over the years, so few of these vintage paper pieces surfaced onto the market. I managed to land my second piece inside of a year. This time, the scorecard was from a Pacific Theater game in 1944 and the names on each of the teams’ rosters was absolutely filled with some of the biggest names from the major league ranks. Rather than this scorecard being solely from an Army game, the contest was part of an (eventual) eleven game Army-Navy All Stars World Series (the program from the fourth game billed the contests as the Central Pacific Area Championship Series). With names on the rosters such as Joe and Dom DiMaggio, Phil Rizzuto, George and Bill Dickey, Hugh Casey, Johnny Mize and Pee Wee Reese, it became a centerpiece in my collection and the motivation for future pursuits.

Since those first two pieces landed into the collection, it has been slow going overall in finding additional pieces. However, overall the trend for available pieces is decidedly in favor of scorecards from the Navy service team games from World War II.

Aside from the Bluejackets teams of the Great Lakes Naval Training Station from 1942-1945, perhaps the service team that has received the most contemporary coverage across multiple forms of media (news, books, blogs and collectors’ online forums) is that of the Norfolk Training Station (NTS) ballclub; also known as the Bluejackets. Even on Chevrons and Diamonds, we have covered the NTS Bluejackets (see: WWII Navy Baseball Uniforms: Preserving the Ones That Got Away) but until now, nothing has been available to acquire – at least not for this collector. Aside from sharing a team name, both installations fielded teams stocked with former professional ballplayers throughout the war.

In similar fashion to the teams recruited and assembled by Lieutenant Commander Mickey Cochrane at the Great Lakes Naval Training Station, Captain Henry McClure and Chief Signalman (and later Boatswain/Bos’n) Gary Bodie began assembling some of the top talent in baseball, inviting veterans (including a few who played in the previous year’s World Series) to enlist into the Navy in order to secure their assignments to the Norfolk training station. Two of the game’s best middle infielders and 1941 World Series opponents, Phil “Scooter” Rizzuto (of the Yankees) and Harold “Pee Wee” Reese of the Dodgers joined the Navy in early 1943 and landed on the NTS Bluejackets (Reese would be transferred to the Norfolk Naval Air Station team in order to spread some of the wealth of talent) ahead of opening day.

The first Norfolk NTS-associated piece that I landed was a type-1 photograph featuring the entire 1943 team in uniform along with Captain McClure and other officers. The quality of the exposure combined with the deterioration and fading that has taken place in the last 76 years has left the players’ faces more of a challenge to identify. After considerable restoration work on the digital scan of the image (in Photoshop), greater detail is discernible and more of the players have become recognizable.

Completing the assembled, two-piece group is a 1943 program from the first three season-opening games that were played at the Norfolk NTS Field (later re-named McClure Field to honor Captain Henry McClure) before a 5,000-person capacity audience. 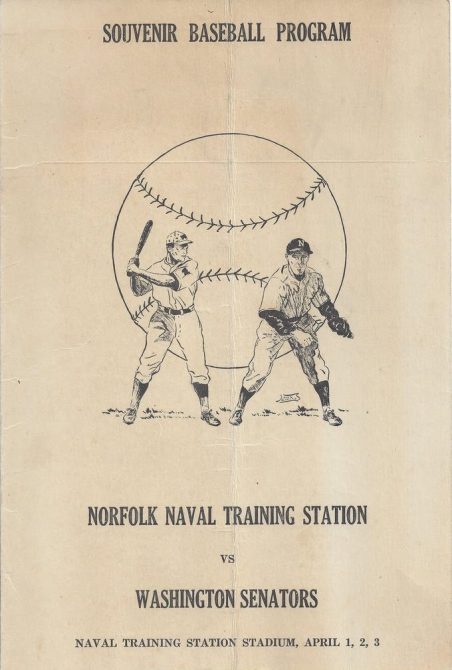 When I first saw the listing for the Norfolk NTS program, I immediately performed my due diligence in order to determine which year it was used. Since the early April dates lacked days of the week, I had to resort to focusing on the names listed on each of the team’s rosters. Understanding that two central players on the Norfolk Roster, Phil “Scooter” Rizzuto and Dom DiMaggio were both serving in the Navy elsewhere in 1944 and each was on their major league club rosters for 1942. In addition, two players who were previously on the Great Lakes Naval Training Station team, Ben McCoy and Don Padgett, which easily intersects with Mickey Cochrane’s 1942 Bluejackets roster. One last point of reference lies with the Senators roster: Jerry Priddy having just been traded to the Senators in the 1942-43 off-season, played for Washington only in 1943 before he was inducted into the Army on January 4, 1944. With the date of the program decidedly dated from early April, 1943, I placed my winning (sniped) bid and a few days later, it arrived.

The 1943 Washington Senators players and coaches.

Though the program shows the opening series as being three days (April 1, 2, 3), only two games were scheduled and played, commencing on Saturday, April 2nd (also scheduled were two games with Naval Air Station Norfolk immediately following the NTS games).

According to the April 8, 1943 Sporting News’ Shirley Povich, the four games were part of the Senators’ Grapefruit League play just ahead of their regular season opener later that month (Thursday, April 2oth as they played host for a single game with the Philadelphia Athletics). Norfolk’s lineup was formidable as the roster consisted predominantly of ballplayers with major league experience. The two-game series was split with each team securing a win. The Bluejackets pounded the Nats 10-5 in the opener as they tallied seven unanswered runs against Washington pitchers Emil “Dutch” Leonard, Milo Candini and Clyde “Mickey” Haefner. Norfolk batters punished the visitors as they tallied 13 hits which included a pair of homeruns by Benny McCoy and “Scooter” Rizzuto while Fred Hutchinson held his opposing hitters scoreless through five innings, limiting them to a lone hit. Tom Earley was on the mound in relief when the Senators erased the shutout.

Phil Rizzuto and Gene “Jerry” Priddy, Yankees teammates in 1942 face each other on the Norfolk NTS Bluejacket’s opening day, April 2, 1943 (photo by Charles Borjes, courtesy of the Norfolk Public Library).

The stands are full of sailors as the Norfolk NTS Bluejackets play host to the Washington Senators for their season opener, April 2, 1943 (photo by Charles Borjes, courtesy of the Norfolk Public Library).

Ben McCoy is greeted at home by Don Padgett (#21) after crushing a homerun against the Washington Senators (photo by Charles Borjes, courtesy of the Norfolk Public Library).

Phil Rizzuto, former Norfolk Tar, at bat for the Bluejackets. The Bluejackets would go on to win the game 10 to 5 (photo by Charles Borjes, courtesy of the Norfolk Public Library).

The program itself is in very good condition. With some creasing, it is obvious that document was folded and probably placed into the original owner’s uniform pocket for safe-keeping. Though the creases are prominent and visible (the more substantial crease extends from the top to the bottom edges and nearly at the center of the page), they don’t detract from the overall aesthetics. The paper is a card stock (much heavier than what is used on most of the wartime scorecards and programs) giving it a substantive feel when handled. What makes this program even more special is the addition of the coaches’ photos across the top of each team’s rosters. Seeing Chief Bos’n Bodie’s face in his photo helps to spot him in the team photograph (above). 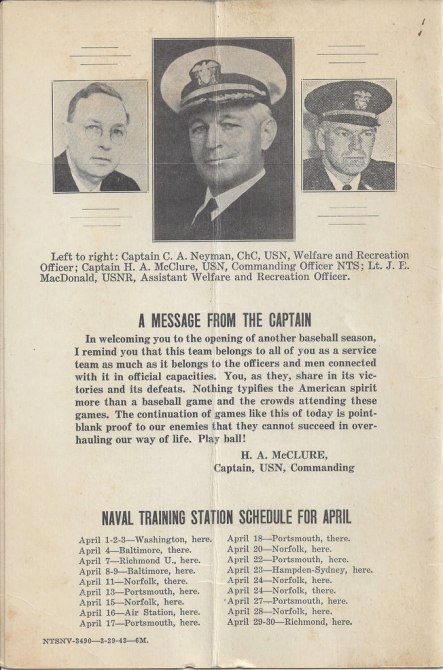 The back cover of the Norfolk Naval Training Station vs Washington Senators program includes the April schedule and a message from Captain Henry McClure.

Three months after the season opener, three men from this roster, Gleeson, Masterson and Volpi would find themselves in Pearl Harbor and assigned to the Submarine Base ball team. Late in 1944, Masterson reconnected with McCoy, Carlin, Feimster, Smith, Rizzuto and Dom DiMaggio on the roster Navy’s All-Star roster to take on the Army’s All-Stars in the Central Pacific World Series Championships played throughout the Hawaiian Islands (see: Keeping Score of Major Leaguers Serving in the Pacific). In 1945, Vincent Smith was assigned to the Third Fleet vs Fifth Fleet All Stars tour of the Western Pacific.

As the war progressed with Allied victories as Axis-held territories were liberated, Army and Navy leadership began concentrating talent into the Pacific Theater to increase competitiveness between service teams and creating an inevitable gravitational pull towards inter-service championship that would lift the spirits of of war-weary service members who flocked to the games.