With the signed baseballs that have landed into the Chevrons and Diamonds collection to date, we have enjoyed much success (albeit delayed) with research breakthroughs as we have identified names on each one. Though it took more than a year to fully identify all of the signatures, the 1943 Pearl Harbor Submarine Base team signed baseball has become a highly treasured piece in the collection. Though the research bear significantly fewer resulting details, the first autographed service team baseball that we acquired, the 1956 36th Field Artillery Group Rammers netted a series of friendly exchanges with one of the relatives of a team member and a subsequent news article (Chuck Emerick is remembered as a great baseball player but an even better husband, father and grandfather) from that player’s hometown paper (the Rock Island Dispatch – Argus).

Autograph collectors wouldn’t give either of the two signed balls in this collection much of a look as neither of them has the signature from a superstar ball player. To a baseball militaria collector, a baseball signed by a team of no-name GIs is invaluable. 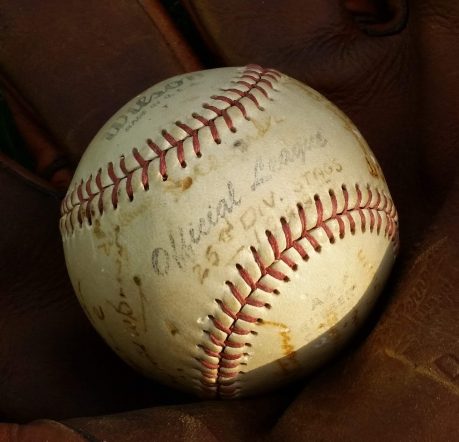 The 1949 team baseball, signed be the members of the 25th Infantry Divisions team, the Stags.

The past several months have been an absolute boom to the Chevrons and Diamonds museum with a steady stream of artifacts ranging from uniforms (three fantastic uniforms including a WWII Coast Guard and a 1955 USAF set) to photographs and other ephemera. The arrivals have been nothing short of overwhelming. When a colleague contacted me to gauge my interest in an item that he had just purchased (it had yet to be shipped to him). When the photographs of the item began to populate my private messenger window, there was no hesitation on my part to affirmatively respond. When he offered it for the price of shipping, I couldn’t type., “I’ll take it” fast enough. 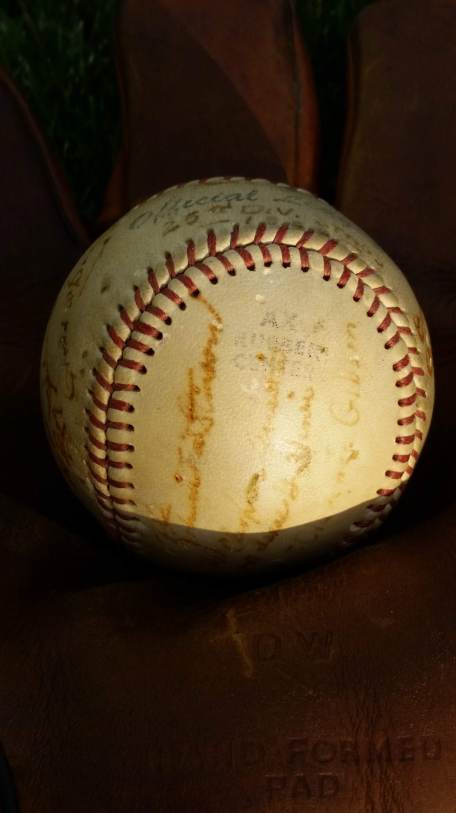 Though the ball is yellowed and faded, the makers stamp is visible on this panel.

Viewing each photograph of the yellowed horsehide, Wilson “Official League” baseball, not one panel was left free from signatures or writing. The inscriptions and signatures appear to have been signed using the same pen as the brown-faded ink (most-likely, originally black). Aside from the heavy fading, the ink has dissipated into the horsehide surface and rendered the signatures and inscriptions challenging to read. The most legible markings on the ball (besides the manufacturer’s stamps) read, “25th Div ‘Stags.’”

Four years removed from VJ-Day, the 25 Infantry Division was an occupying force in Japan. Established well before Pearl Harbor in 1941, the “Tropic Lightning” Division began engaging the enemy forces on Guadalcanal in late 1942 after relieving the First Marine Division and fought against Imperial Japanese forces at Cape Esperance, New Georgia, Vella Lavella and Luzon, sustaining over 5,400 casualties by War’s end.  Inscribed with the date of 1949, which means that the ball was used during the last summer of occupation and months prior to the Division being transferred to the Korean Peninsula in July of 1950 as hostilities were breaking out.

Not only is the handwriting in this inscription difficult to read but the faded ink renders the autographs nearly illegible.

The ink has faded rendering these signatures less than legible.

Some of the team members of the 25th Infantry Division Stags: Larry Jackson and Harold Fry are discernible at the top of the signatures.

I am only just beginning to research the details of the 25th Division baseball. A handful of cursory searches have not yielded anything of substance regarding the division’s team (the “Stags”) as of yet. It is my hope that I can source a unit or veteran group newsletter that might mention the team and players who filled the roster and perhaps, that might happen if this article is discovered by 25th ID historians or unit veterans (or their descendants) who might still be living.