An integral part of a baseball team uniform to provide protection from the sun and to shield players’ eyes from intense glare, baseball caps extended into the ranks of the armed forces for daily uniform wear.

Keeping a watchful eye out for military baseball items may seem like an easy task to an outsider, especially when it comes to searching for uniform elements such as jerseys, trousers or caps. To those of us who have continually running searches that employ a wide range of keywords, hoping to find that one elusive piece that may have been overlooked by less discerning collectors, the task is a challenge. I have written in a handful of previous articles of the difficulties in finding the crown of the baseball uniform; the baseball cap.

A few searches of online auctions at any given time could, on occasion, yield a vintage ball cap within the results. However, knowing what to look for makes all of the difference in confidently acquiring a piece (especially if it lacks provenance). Studying vintage ball caps, whether from the minor or major leagues or from semi-pros and amateur leagues that operated in the last century will carry the prospective collector far when attempting to identify and date the items.

This ball cap is made from cotton material that has softened, most-likely due to considerable wear by its original owner. The bill is in fantastic condition even if the crown lacks its original form.

The blue wool flannel of the 3rd Air Force ball cap is vibrant and in great condition with the exception of two stains that might be removed with a gentle cleaning.

This poor Marines cap shows evidence of extensive wear and some damage in the bill. Despite what was done to the cap, it still looks great when displayed.

There are a handful of resources that exist (at present) online. One of them, the Baseball Hall of Fame Museum in Cooperstown, New York shares photographs of examples of the artifacts housed in their facility. Perhaps the most invaluable online resource is MLBCollectors.com which provides incredibly detailed photography combined with dates and some descriptions for uniforms from every major league team which I use to evaluate designs, construction and manufacturer’s tags as known examples for comparison. 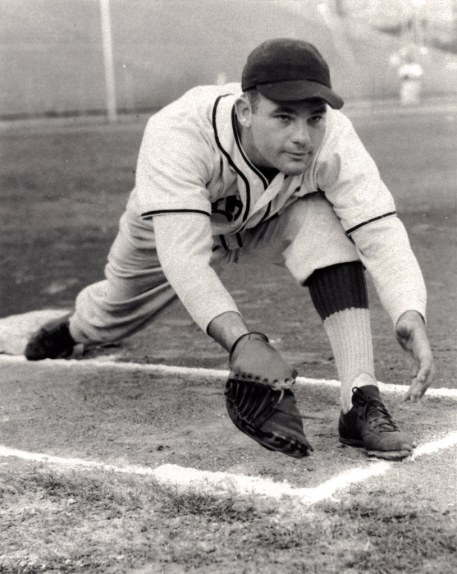 To further the comparative analysis, our extensive vintage photography archive provides numerous examples of caps (and uniforms) worn by military ball teams and acts as a catalog of what to be on the lookout for.

Turning the blue Marines cap over, one can get a better perspective of the damage to the cap from moisture stains and the two holes in the bill.

The most consistent design used across all branches during WWII was a six-panel crown made of dark (navy) blue wool with a leather sweatband. Whether plain or with an emblem attached to the front panels, these hats were common throughout the armed forces service teams. In addition to what was seen on the military diamonds, caps were worn by some personnel within the ranks of the various branches as part of their working uniforms. From the outside of the caps, they can appear to be identical to those worn by players on the field (in some instances, these hats could be distinguishable by the presence of a military stock or supply number inside of the sweatband). Wool caps were standard military supply system-stocked item for aeronautical materials Class-37 and was available for appropriation in three colors; red, green and blue (the blue color was so dark that it appeared, in many instances to be black).

Naval aviators on shore-based commands were the navy ballcaps as part of their daily uniform (image source: U.S. Militaria Forum).

It is unclear whether the owner, a Boston Red Sox fan, added the red “B” to this cap or if it is Sox team cap. The Marine aviator added his unit identifier and had it signed by his squadron mates (image source: U.S. Militaria Forum).

In observing the many examples of service members’ caps, it has been noted that there are considerable variations that range from differing sweatband configurations, materials (and color variations) on the underside of the bill, manufacturers’ tags (ranging from military stock system, private purchase or none at all). However, from the topside perspective, the caps appear to be identical. 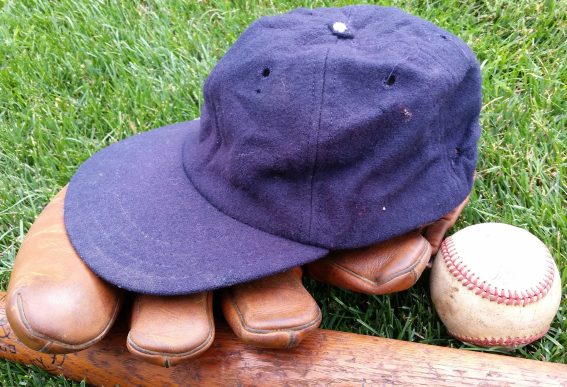 The cap shows a little wear, fading and mothing, but the overall condition is quite good. The bill stiffener is intact.

When a WWII-era navy blue wool ball cap became available, it was listed merely as a wool baseball cap that was part of a veteran’s estate. Discussion with the seller confirmed that the World War II veteran most-likely played baseball during his wartime service as there were Navy photo albums (not for sale) that held some images of the sailor in his baseball uniform (though I could only take his word). The cap showed some wear but was in overall good condition so there was no hesitation to bid on it.

This underside perspective shows that the cap was customized by removing the back section of the sweatband and installing an elastic band in order to keep the cap form-fitting.

The standard cap for most service and unit baseball teams during the war, some were fitted with an emblem on the front panels while most were blank like this one.