It probably shouldn’t seem strange to us after more than a decade dedicated to the pursuit of baseball militaria but 2020 has been a surprising year in terms of the scarcity and rarity of artifacts that have arrived at the Chevrons and Diamonds collection: treasures such as bats, gloves and baseballs that have left us stunned and four wartime flannel uniforms (all Navy) that began to trickle in early in the year. Keeping with that trend, another treasure that had previously seemed unobtainable for well over half  a decade became available.

Collecting baseball militaria is a far different endeavor than what baseball or militaria collectors experience. We often find ourselves  seeking the unknown as so much of what we uncover has not been documented in previous sales or auction listings.  One such occurrence toward the end of 2019 was the acquisition of the only known example of a scorecard from the first game of the 1945 ETO World Series (see: Keeping Score at Nuremberg: A Rare 1945 GI World Series Scorecard). Though we had been in search of a scorecard or program from this series,  exactly what was used to keep score was unknown..  When the ETO piece surfaced, there were several elements that helped us to quickly determine that it was from the series and that we had finally found the Nuremburg-used piece that we had been seeking. (We also discovered that there was another scorecard used for the games hosted at HQ Command’s Athletic Field, located at Reims in France.)

Ephemera such as scorecards, programs and scorebooks from service team games or fundraiser exhibitions (games played between service and professional teams) can pose quite a challenge to locate due to numerous factors. Some of the games were played in front of small audiences, which resulted in a small number of scorecards or programs being distributed among the attendees. Of those who kept their paper items after the game, how many survived travel, moves and the elements during the last 70+ years?

On October 3, 1943, a fundraising game was played at Stockton Field,  which was home to the Army’s West Coast Training Center and the Air Corps Advanced Flying School, before a capacity crowd of 6,000. Similar to many other fund-raising service exhibition baseball games, this contest pitted the San Francisco Seals against an All-Star conglomeration of West Coast-based service personnel who were formerly professional ballplayers. 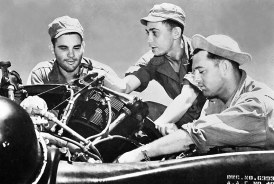 All eyes were focused upon the two stars, future Hall of Famers, who were playing for the service team..  Charlie Gehringer, the Detroit Tigers’ “Mechanical Man” second baseman who retired after a 19-year major league career, enlisted in the U.S. Navy and attended instructor’s school at the University of North Carolina, Chapel Hill in the Navy Pre-Flight program. After graduating from the program, Lieutenant Gehringer was assigned as an instructor at the Navy Pre-Flight School, St. Mary’s College in Moraga, California, and was named the head coach (he also played) of the school’s baseball team. During the 1943 season, Gehringer’s club posted a 24-5 record, including defeats handed to San Francisco and Oakland of the Pacific Coast League as well as Stanford and University of California, and claimed the All-Service League’s championship (see: Discovering New Research Avenues: SABR and The U.S. Navy Pre-flight School at St. Mary’s). The other star under the spotlight, Joe DiMaggio, entered the U.S. Army Air Forces on February 17, 1943, despite his 3A draft deferment status, just as his Yankee teammates were starting spring training.  Recognizing the public attention that DiMaggio would bring to fund raising efforts, the USAAF leadership assigned him to the Santa Ana Army Air Base (SAAAB) in Southern California following basic training at Fort Ord, CA, which was the headquarters for the West Coast Army Air Corps Training Command Center. The Yankee Clipper’s new squad had modest success. The Rosebel Plumbers, a civilian industrial league club, and the 6th Ferrying Group team bested the SAAAB nine in 1943 league play,  despite DiMaggio’s 20-game hitting streak.

With combat in the Pacific raging on and around the Solomon Islands ashore, on the seas and in the air, the physical toll on service members required more medical care facilities on the West Coast. Three months after Pearl Harbor, the Army Corps of Engineers purchased acreage from Stanislaus County and immediately began construction on a 2,500-bed facility. One year after the initial land acquisition, the new Army medical facility, Hammond General Hospital, was designated as one of only five thoracic surgical centers on the West Coast and could treat the most severe combat traumas. When combat wounded arrived at Hammond, it was clear for most of them due to the severity of their injuries that the treatment they received was for stabilization and for their return to society. Troops would receive neurological care, general and orthopedic surgery, neurosurgery and psychiatry as well as rehabilitation during their stay at Hammond.

Recreation at Hammond General Hospital was needed for patients and staff alike. Baseball was a universal activity that could be incorporated into the rehabilitation process for recovering wounded troops (Phil Rizzuto formed a league for wounded Marines and Sailors recovering in Brisbane, Australia, in 1944. See: Serving Behind the Scenes, Rizzuto Shared His Heart for the Game). With the regular California service league play completed in September, the Hammond charity game was scheduled for Sunday, October 3, allowing time for the teams to be assembled. The game was promoted as a fund raiser “for the benefit of wounded veterans at Hammond General Hospital” (“Joe DiMaggio Will Be Feature of Game” – The Spokesman Review, September 28, 1943) in West Coast newspapers, with DiMaggio as the “main attraction.” 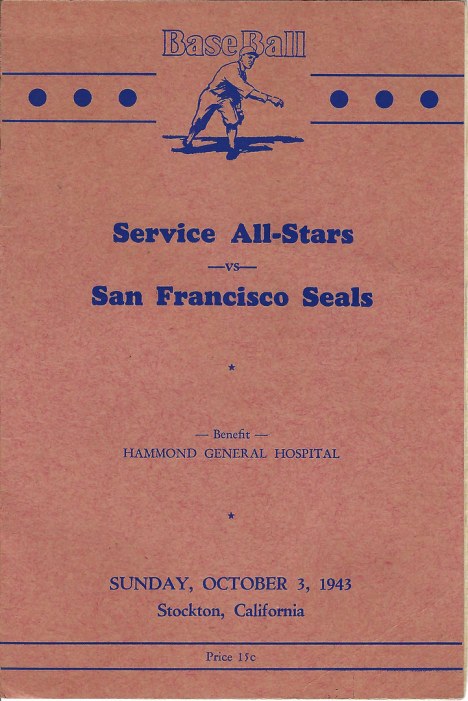 One of the nicest wartime service game programs, this 1943 Hammond General Hospital( fundraiser All-Star game featured two future Hall of Fame players who were serving in the armed forces (Chevrons and Diamonds Collection).

Several years ago, a program was listed at auction showing only the cover of a program from the charity game played on October 3, 1943, between a “Service All-Stars” team and the San Francisco Seals. The price was considerably steep ($299.00) for the piece and yet the listing was scant in detail and only mentioned Joe DiMaggio as one of the players on the service team. Considering the price and the lack of detail, we decided not to pursue the piece. As we researched the game with hopes of finding another available copy of the program, we discovered that the Baseball Hall of Fame’s museum also had a copy of the program in their archives (see: Baseball Enlists: Uncle Sam’s Teams). Their site, as with the auction listing, showed only the cover and mentioned an additional star player on the service team.

The program and scorecard consists of front and back covers with six interior pages. Constructed from a sheet of cardstock (covers) and lightweight paper (interior pages), the piece succinctly describes the reason for the game and provides the lineups for each team on separate pages, along with scoring grids. Advertising occupies the two interior pages opposite  the front and back covers and the centerfold page features head shots of DiMaggio and Gehringer.

The centerfold of the Hammond game features Joe DiMaggio and Charlie Gehringer, both future Hall of Fame enshrinees (Chevrons and Diamonds Collection).

“The U.S. Army Air Forces and Stockton Field take this opportunity to express their appreciation to the San Francisco Seals, 1943 Pacific Coast League baseball champions, for their cooperation in making today’s game possible.

Victors over Portland and Seattle in successive Shaughnessy playoffs, the Seals come here today to meet one of the best all-service nines assembled in the West to play in a benefit game dedicated to a great cause – the athletic and recreation fund of the Hammond General Hospital at Modesto. Our thanks, therefore, also are extended to the commanding officers of the various army posts who released their all-star players to make this contest a reality.

Today’s tilt not only helps a worthy cause but also marks the realization of every baseball fan’s dream – a game between two great teams. Stockton is fortunate to play host to such an outstanding assembly of baseball greats.”

Despite his central billing in the game’s promotion, DiMaggio’s bat was not a factor. In his first appearance, the Yankee Clipper reached on an error and his three subsequent at-bats resulted in outs. Gehringer was 1-for-4 with a single in the third inning. The offensive star for the service team was catcher Ray Lamanno with a 3-for-4 showing (two doubles and a single). Former San Francisco Seals first baseman Ferris Fain was the only other service member with a multiple-hit game (two singles). DiMaggio did display his defensive skills with four putouts from center field. On the mound for the Service All-Stars were Rinaldo “Rugger” Ardizoia and Tony Freitas (Athletics, Reds), both of whom hailed from Northern California.

Though the scorecard lists the opponents as the San Francisco Seals, the actual team was a conglomeration of players from the Pacific Coast League and from California. The “Seals” team featured five former major leaguers (pitchers Tom Seats and Bob Joyce, catchers Joe Sprinz and Bruce Ogrodowski and left fielder Hank Steinbacher) who were on the Seals’ 1943 roster along with two others. Former Athletics hurler Joyce went the distance on the mound in the losing effort, surrendering six runs.  Sprinz, formerly with the Cleveland Indians, served as Joyce’s receiver. Anderson was the leading batsman for the so-called Seals with three hits and centerfielder Vias stroked a pair of singles, though only two runs were plated in the loss to the service team.

Scorecards from service team games are scarce and pose considerable challenges to locate, let alone acquire. The Hammond General Hospital charity game program eluded our reach until a much more reasonably priced copy surfaced a few weeks ago at auction. Our winning bid secured the piece at a fraction of the aforementioned copy and after years of waiting, we finally landed our own copy. Aside from rust stains surrounding the two staples that secure the lightweight internal pages to the cover, the condition of our artifact is excellent, with no dog-eared pages or creases.

The program’s inside front cover and the line-up and scoresheet for the “San Francisco Seals” team (Chevrons and Diamonds Collection).

Pages 5 and 6 feature the line-up/scoresheet for the Service All-Stars as well as the acknowledgements and local businesses’ advertisements (Chevrons and Diamonds Collection).

Until we saw the initial copy of this scorecard, we had no idea that it existed. Not knowing what to look for poses perhaps the most significant challenge in collecting baseball militaria. Once we knew about the Hammond piece, it took several years to find one within our reach.

Posted in Ephemera and Other Items, Programs, Score Books, Scorecards