One area that is a more recent development – awards and decorations – is becoming a nice addition to my collection. Adding breadth to my collection of military baseball artifacts (beyond uniforms, photographs and equipment) in the form of metal decorations helps to show the results of the competitive nature of the sport but in a more representative fashion. While traditionally, championship teams are awarded trophies and rings, the military has a different take on how to bestow victors’ hardware upon its champions.

I have authored several articles regarding U.S. armed forces decorations and awards (including Happen to Have $250k for a “Rare” 1775 Medal?) in which I touch on the the development and progression of medals that are awarded for personal valor; individual and unit achievements and accomplishments; participation and support of campaigns and conflicts; and qualifications in various military disciplines. Once a service member receives an official award or decoration, it becomes a permanent part of their uniform for the duration of their career. Certain decorations can be qualify veterans for benefits in post-military careers (such as added points to a civil service testing score) or with public recognition (valor medal recipients vehicle license plates, for example) and they are authorized to formally wear their issued decorations on civilian attire.

In the militaria side of my collecting and research passion, I don’t have a personal interest in acquiring awards and decorations presented to other veterans, though I have a few pieces in my collection. Most of what I have were inherited as part of my (now deceased) relatives and I am now honored to be the caretaker of their history. 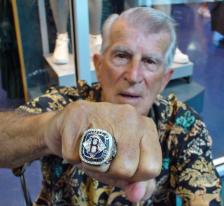 Boston Red Sox legend and WWII veteran Johnny Pesky shows off the World Series ring presented to him by the team following their first championship since 1918 (image by “Hackhix”).

I have also acquired some medals and ribbons in my efforts to “rebuild” and recreate ancestors’ displays to represent their service in the armed forces. The idea of purchasing medals to own – especially those awarded posthumously (such as Purple Hearts) – doesn’t sit well with me due to the personal nature of the award and the familial grieving that is associated with the presentations made to the surviving family members. However, I recognize those collectors who go to great lengths to preserve and honor both the veteran and their history in their pursuits of these significant decorations.

The history of awarding medals for sporting proficiency dates (at least) as far back to the establishment of the modern Olympic Games in 1896 when victorious competitors were awarded a silver medal and, as was done in the ancient games, an olive wreath. Runners-up received a bronze medal and wreath (the three-tiered medals of gold, silver and bronze commenced with the 1904 St. Louis games). Today’s fans of the game of professional sports are familiar with the practice of championship team members being presented with rings commemorating their victorious season of competition, a practice that began in 1922 following the New York Giants World Series. In the years prior, individual team members were presented with varying jewelry; pocket watches, pins, watch fobs and medals.

A sterling silver baseball medal awarded to a team from the APO stationed at Goose Bay, Labrador during WWII.

A medallion for a Republic Aviation baseball team member.

Over the last year and a half, I have added three medals that were awarded to members of military baseball teams (not to mention a medallion presented to members of a ball club fielded by a military aviation contractor) ranging from a medal awarded (in 1944) to an American baseball team from the Army Post Office (APO 677) team based at Goose Bay, Labrador (which is awaiting my research efforts), to one awarded to a ball player on a Citizens’ Military Training Camp team, and finally the medal presented in 1924 to (then future rear admiral and three-time Navy Cross recipient), Naval Academy Midshipman Frank Fenno for his .410 single-season batting average. These pieces of hardware have been fantastic additions to my collection. 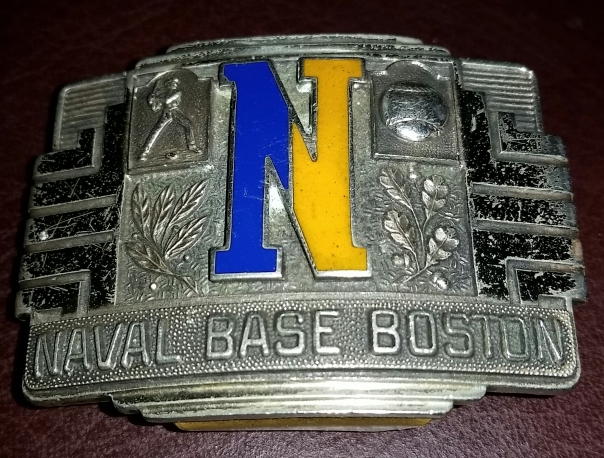 The baseball medals, with the exception of the Republic Aviation medallion, all possess inscriptions and details that afford a pathway for researching specifics regarding the manner in which they were earned. One of my most recent acquisitions is lacking such data and will, most certainly leave me with no such research trail to follow. I am admittedly a novice with many collecting focuses and though I have a handful of belt buckles, this is an area that where I have virtually no interest. The buckles that I own predominantly originate as part of the military uniform that I wore during my service, some of which were custom-made and commemorate the ships on which I served. However, this baseball-themed artifact, perhaps some manner of an award for a winning team, piqued my interest and was an appropriate fit with what I have been bringing home. 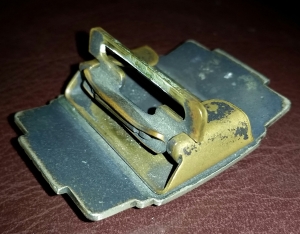 The weight of this small buckle perhaps stems from a nickel face plate and solid brass mechanism.

Motivated by the Art Deco design the two-color enamel of the emblem, the baseball theme and the low opening bid amount, I decided to set my maximum price (and ultimately, the winning bid amount) to see if I could land the small Naval Station Boston buckle. One area that had me questioning the history and accuracy was the name cast into the face of the buckle – “Naval Station Boston” – doesn’t exactly exist, nor did it ever in any official capacity. The photos accompanying the listing weren’t as detailed as I prefer, so I assumed that there might be a maker’s mark located within the clasping mechanism on the back of the buckle.

Of the naval installation that existed in the Boston area leading up to or during World War II, not one is referred to as Naval Station Boston:

The lack of such a reference is, in my opinion inconclusive based upon my understanding of how sailors can and often to morph the names of their duty stations. Another possibility for the unofficial name could be the result of a team comprised of players from numerous surrounding commands forming a conglomeration that was thus named, Naval Station Boston. The next step in researching will be to scour news article archives of the region within that time-period in hopes that there exists some coverage of the team’s competition. 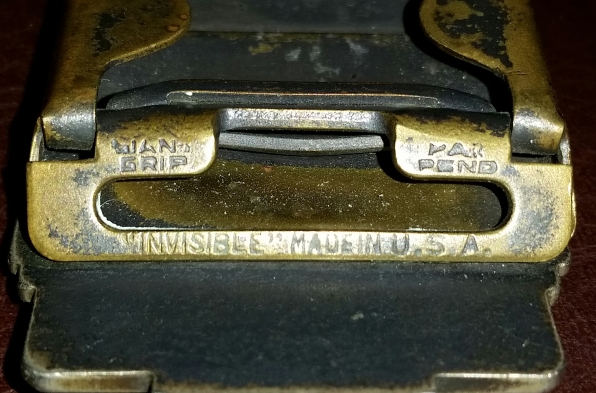 The stamped markings read, “GIANT GRIP” and “PAT PEND” flanking the top of the locking mechanism with  “INVISIBLE” and MADE IN U.S.A. across the bottom.

When the buckle arrived, my initial action was to check the back for markings that would indicate a date of manufacture. Aside from the Art Deco-influenced design (which was at its zenith in the early 1930s), trying to pinpoint the date without an actual mark is nearly impossible with the visual influences of that period continued on into World War II. Cast into the buckle’s locking mechanism in very tiny lettering, was GIANT GRIP, PAT PEND, “INVISIBLE” and MADE IN U.S.A., none of which provided more assistance than to find other listings of similar buckles.

The reverse of the football buckle show a different representation of the “GIANT GRIP” stampings (source: eBay image).

Buckle, perhaps made by the same manufacturer, is dated, 1938 (source: eBay image).

The back of the baseball buckle is nearly identicle to the football example (source: eBay image).

With my to-be-researched pile growing, this piece will have to remain prioritized towards the bottom.