One of the commonly asked questions among collectors after they have been involved for extended periods of time and after amassing a well-curated collection is, “what becomes of it all when I pass?” Bequeathing a collection of memorabilia to a person who has nothing more than a passing interest (not to say what should be done when the heir has no interest or the collection was a source of frustration for that person) in what is collected is a disservice to both the collector and the heir.  What is the best course of action?

Millennials and the generations that follow them are learning some valuable lessons in life; one in particular that minimalism is a good practice in that the accumulation of burdensome stuff is avoided. While being raised with an environmental-focus in which methods of recycling and avoidance of non-reusable packaging is a good practice, one of the bi-products is that memories are just as disposable to these generations as are two tear-old iPhones. The only keepsake memories that matter within the social consciousness of young people are what can be synchronized from their phones into the cloud. Keeping a “hard-copy” of a photograph is wholly unnecessary too younger people.

In Why Are Millennials Rejecting Prized Family Possessions?, Lisa Schmeiser wrote, “more young adults are used to collecting digital assets, not physical ones; this may be related to the relatively recent shift toward experience as a consumer good and the attendant bonus of curating one’s social media feed to show one’s experiences.” Allow that to resonate a moment. Tangible versus digital. Rather than becoming more conscious of preservation and enduring artifacts, we are becoming a society of disposable history with memories committed to the mind and the cloud rather than something that can be seen, touched, held or smelled. For those who subscribe to the disposable possessions mindset, the idea of receiving someone else’s collection is not only rejected, it is downright repulsive.

Of course, there are exceptions and many collectors are surfacing to further the interests and preserve the privately-owned history that resides within memorabilia collections. Aging collectors with well-established and well-curated collections that contain museum-quality pieces, finding takers (buyers and potential heirs) might be and easier task than it is for the common collection and the typical scattered (and the apparent) unfocused approach taken by everyday people.

The final disposition of a collection upon the departure of its owner is best decided and planned by its owner well before he or she passes away. Leaving heirs or estate executors to determine valuation and to make decisions for disposal of collection items could be disastrous. Having a plan in place can head off a bad decision such as selling a piece for a fraction of its market value or, worse yet, allowing an historic item to end up in a landfill (yes, it does happen). Another sound method for disposal of a collection would be for the collector to take action while he or she is capable. Many collectors seek to downsize their living arrangements reducing or all together eliminating the space that would otherwise afford the display and storage of a collection. Collectors know the value of their pieces and can ensure that the best prices are negotiated and the transactions are finalized without pressure. Also, items can be gifted to organizations or museums (if the artifact is historically significant) to ensure that the piece is enjoyed by larger audiences.

New York Giants hall of fame pitcher and his other love, the game of checkers. Here, Christy Mathewson challenges his father for a game of checkers on a checkerboard resembling the inscribed custom piece that is currently a part of Penny Marshall’s baseball memorabilia collection (image source: Robert Edward Auctions).

As the news of the December 17, 2018 passing of actor and director, Penny Marshall began to circulate, talk of her memorabilia collection began to percolate within the baseball memorabilia collector community. Marshall’s collection is substantive and contains an overwhelming percentage of modern autographed photographs and equipment. However, she did collect many eclectic, unusual and rare baseball artifacts that were the spotlighted in Stephen Wong’s fantastic book, Smithsonian Baseball: Inside the World’s Finest Private Collections. From a folk-art table that hold 56 autographed baseballs commemorating New York Yankee (and United States Army Air Forces) legend, Joe DiMaggio’s 1941 hitting streak to a custom-made checkerboard owned and used by New York Giants hall of fame pitcher (and WWI veteran) Christy Mathewson, Penny Marshall’s baseball memorabilia collection is quite unique. In a 2011 visit by (NBA star) Ron Artest to Marshall’s home (a video interview for ESPN), Marshall mentioned that following a visit by officials from the curators, many pieces would be sent to the Baseball Hall of Fame (upon her passing).

Leaving behind a legacy or concerning one’s self with the idea of how we are viewed by others after our time here on earth has been completed is for the conceited just as is burdening our survivors with the task of the divestment of our collections. The best legacy is one that allows family or loved ones with the knowledge that we have performed our due diligence in crafting a plan and eased their burdens. 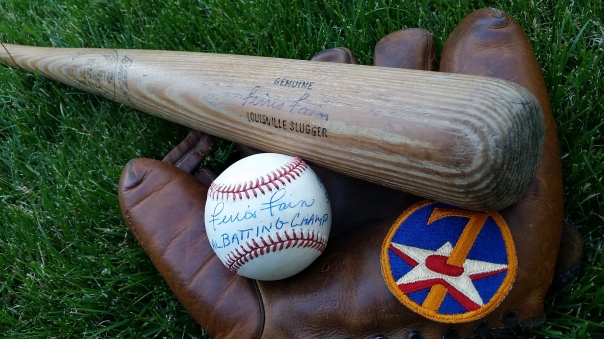 Realizing that these Ferris Fain pieces (a modern day signed ball and a 1950s store model bat shown here with a WWII U.S. Army glove and 7th Air Force shoulder sleeve insignia) are not too terribly desired among collectors, making a disposition determination for such pieces needs to be made now rather than to leave the decision up to an heir or estate executor.

The woman who was known to the general public for her acting in 1970s television and directing blockbuster films, was renowned by her friends for her sports collecting and her love for the game of baseball. Her passion for the game led her to create one of the most-loved sports films of all time. Penny Marshall’s 1992 blockbuster film, A League of Their Own grossed $132.4 million and drew critical praise for shedding light upon the All American Girls Professional Baseball League and women’s role in preserving the game during World War II. One can only imagine how much Marshall’s baseball memorabilia collection grew during the research, writing and production of the film as well as the nature and historic value of the pieces she added.

With her passing, it is only a matter of time before the bulk of her massive archive of autographs, jerseys, ball caps and other artifacts are listed at auction and dispersed finding their way into other collections. However, the most unique and historically significant pieces will soon be available for baseball fans to view at the National Baseball Hall of Fame in Cooperstown, New York thanks to Penny Marshall’s forethought and estate planning.

After all, “there’s no crying in baseball.”

Posted in Players and Personalities