Admittedly, when we consider wartime baseball, images of ballgames being played in far-away locations in combat theaters within reach of the war front, if not on domestic training bases.  The Chevrons and Diamonds vintage photograph archive is replete with a diverse array of images capturing the game within the major war theaters (Europe, Africa, Asia and the Pacific) along with countless military bases, camps, forts and training facilities. Our continual mission to preserve, digitize and restore the photographs within this extensive library (along with curating additional images) is a considerable undertaking requiring an immeasurable amount of time and effort. As with many of our activities, this particular process often involves research which leads to fantastic discoveries.

There are occasions that we pursue a vintage photo (or group) without performing due diligence to fully comprehend the discernible subject matter. Depending upon the size of the image or how it is being presented for sale, the level of detail that is visible can be quite limited prior to an in-hand examination. Even after the image or images arrive, our workload may preclude anything more than an initial content and condition assessment prior to placing into appropriate storage and in our queue for preservation and digitization.

One such group of photographs that we acquired some time ago depicted a team of men wearing flannels with a beautiful script “U.S. Army” in athletic felt applied to the jersey fronts. The photos all seemed to have been captured in an old-time civilian ballpark surrounded by fencing (complete with large painted advertisement signage) and grandstands constructed in wood. Having been tucked away in archival storage, these were finally retrieved for the digitizing and restoration process. With the prints suffering from various typical maladies seen on images more than three-quarters of a century old such as exposure challenges, creases, tears, scratches and emulsion deterioration, the volume of effort that was required was substantive.

The 19 vintage photographs in this U.S. Army group were predominantly sized in the 4”x 5” range with the focus, composition and exposure consistently representative of what is seen from professional photographers, though a few were overexposed. The reverse of each photo is stamped with the Official U.S. Army Air Forces mark indicating the source and releasing (to the media) authority. As each photograph was scanned, the details present within the images became quite discernible yielding more information and subsequent questions that directed my research pathways. Once a few of the photos were scanned, we discovered that what we originally assessed to be the Hale America “HEALTH” patch was actually a shield insignia with letters spelling out “YANKS.” In addition to the uniform patch, the advertisements clearly indicated that the venue where the photos were captured was in Alberta, Canada.

Warming up in third base territory, the sleeve patch is fully visible on this Yanks player (Chevrons and Diamonds Archives).

Following the path of least resistance, we reached out (with a sampling of our photos) to our colleagues who are specifically interested in preserving baseball history in Western Canada. Within a few hours of posting our photos to the group on social media, a response came from Jay-Dell Mah who has extensively researched the history of the game in that region. Jay-Dell’s site, Western Canada Baseball, encapsulates years of extensive research findings, photographs and ephemera along with the history of leagues, teams and personnel. Mah referred me to the 1940s section of his site, pointing me to the Edmonton, Alberta content. 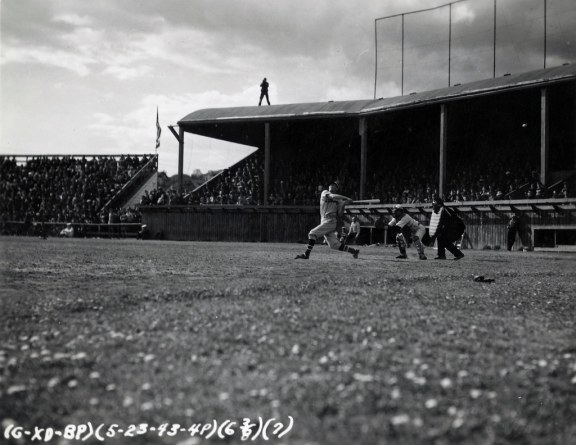 A Yanks batter takes a cut in front of a capacity crowd at Edmonton’s Renfrew Park (Chevrons and Diamonds Archives).

In the past few years, our collection was introduced to wartime baseball that was played on Canadian soil. In researching for our article,  “Talk to me, Goose!” A 1950s-Vintage U.S.A.F. Uniform Touches Down, we learned about the game as it was played by U. S. service personnel on bases and within the communities throughout Labrador. Without expending any effort, we were safe to assume that the same could be said for the Canadian West Coast as U.S. service personnel would have been stationed there fulfilling a similar strategic purpose. However, these photos appeared to be captured in the Canadian interior province of Alberta which seemed to be of little strategic significance to warrant positioning U.S. military personnel and resources. But the region did have considerable importance to the war effort as it was part of the North American “breadbasket” playing a central role in sustaining citizens and the allied forces with food.

“…a force of U.S. personnel, both military and civilian, poured into northwest Canada to build the logistical facilities needed to support the defense of that quarter of the continent. United States military strength in northwest Canada in late 1942 exceeded 15,000, and in the next year, when some of the troops had been replaced by civilian workers, U.S. civilians alone exceeded that figure. On 1 June 1943 the total strength of the American personnel in northwest Canada was over 33,000. In some instances, the United States was able to utilize existing air-base and other facilities, expanded by either or both countries to meet wartime requirements. Other projects were carved out of the virgin wilderness, in some cases in areas never before surveyed. It was here in western Canada that the joint U.S.-Canadian war effort left its biggest and most lasting imprint.” – U.S. Army in WWII Special Studies: Military Relations between the U.S. & Canada

Baseball had been a part of the Canadian fabric with its roots being sent down on a parallel timeline with that of the game south of the border. United States service personnel located in Alberta fielded teams that integrated into the surrounding civilian leagues. In 1943, the U.S. Army Air Forces team based in Edmonton known as the “Yanks,” participated in the local city league, capturing the championship. In the 2006 historical narrative about the province, Alberta Formed Alberta Transformed (edited by Michael Payne, Donald Wetherell and Catherine Cavanaugh) a caption reads, “With thousands of American military personnel in Alberta, their presence was felt everywhere. This U.S. Army baseball team won the title in the 1943 Edmonton baseball league.”

A U.S. Army Yanks base-runner races to first as another one reaches second on a single (Chevrons and Diamonds Archives).

Unknown if this is Albert Goodrich, Frank Hindelong or Anthony “Tony” Lollo (Chevrons and Diamonds Archives).

This wonderful perspective taken from the roof of Renfrew Park shows the Yanks in the field (Chevrons and Diamonds Archives).

One of the heavily overexposed photos in the group, we were able to pull the details back with some editing (Chevrons and Diamonds Archives).

The 1943 Yanks roster consisted of officers and enlisted from the U.S. Army air base and were led by Eau Claire, Wisconsin’s Captain Frank Wrigglesworth who aside from managing the team also saw actions at second base in 14 games.  Not only did the Yanks capture the pennant of the Edmonton City League, but they were also the champions of Alberta Province. Unlike domestic teams such as the Great Lakes or Norfolk Naval Training Station Bluejackets, the McClellan Field Flyers or the 6th Ferrying Group, the 1943 U.S. Army Air Forces Yanks lacked top-tier major league talent and instead, featured players who were merely serving as most of America’s young men were. In the absence future Cooperstown enshrines, the Yanks made due with their roster that included two players who entered the armed forces from the minor leagues; pitcher Wayne Adams (Decatur Commodores) and Walter Misosky (Crookston Pirates), a left-handed-pitcher who also spent time in the outfield. After the war, outfielder Manuel Dorsky and shortstop Harley Miller parlayed their Yanks experience into minor league careers. 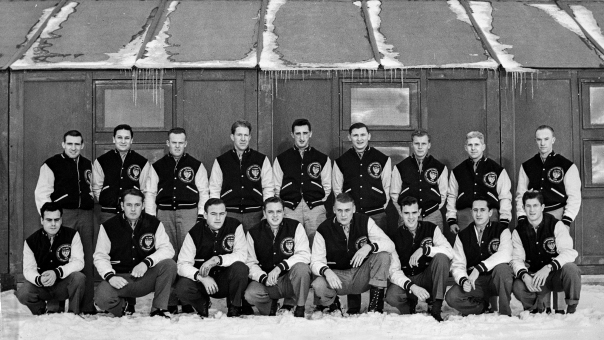 The 1943 U.S. Army Air Force Yanks posed in the Edmonton Snow (Provincial Archives of Alberta, A7253).

With the exception of one photo, none of the images bear any marks that identify the players. One image has what appears to be the signature of first baseman John Gullekson though the mark could simply be the player’s name applied to the photograph. Using the 1943 Alberta Photo Gallery page on Mah’s Western Canada Baseball site (that identifies Wayne Adams, Andrew Konopka, Harley Miller and Walter Misosky), we were able to identify one more of the players in the group of photos.

Leaping to make the grab, this appears to be first baseman John Gullekson (Chevrons and Diamonds Archives).

A U.S. Army Yanks base-runner races to first as another one reaches second on a single (Chevrons and Diamonds Archives).

The photos in this group show that the Yanks played some, if not all of their home games at Renfrew Park. Renfrew Park opened in 1935 and would later be renamed John Ducey Park and eventually serve as the home to the Pacific Coast League’s Edmonton Trappers until it was torn down in 1995, giving way to Edmonton Ballpark (Telus Field/ReMAX Field) that was constructed on the same site. With the distinctive roof structure covering the grandstand, the Renfrew is unmistakable in the Yanks photos.

One of the Yanks’ right handed pitchers (Chevrons and Diamonds Archives).

Hopefully in time, we will be able to determine if this is middle infielder, Harry Baldwin, Harley Miller, Charles F. “Skip” Phillips or Frank Wrigglesworth (Chevrons and Diamonds Archives).

Only time and further research will allow us to identify most, if not all of the men in this group of photographs. In the interim, it is our hope that enthusiasts, baseball historians or the Yanks family members will enjoy a peek into U.S. and Canadian wartime baseball history.

Posted in Ephemera and Other Items, My Collection, Vintage Baseball Photos, WWII