Breaking the Color Barrier in the Ranks and on the Diamond

A few months ago, I was contacted by a college professor, Peter Dreier of Occidental College, who was seeking information, documents, data or photographs that would be beneficial to his research pertaining to the European Theater of Operations (ETO) World Series games played between the 71st Infantry Division Red Circlers and the OISE All-Stars teams at Nuremberg Stadium. Sadly, I didn’t have a single shred in terms of new details or insight that could be of assistance in his effort to create a presentation (for the Baseball Hall of Fame Symposium) or to his book project regarding Sam Nahem and his decision to fill his Overseas Invasion Service Expedition (OISE) All-Stars roster with the best baseball players he could find.

At a time when Jim Crow laws and sentiments were still very pervasive in our country, the sting of segregation faced by people of color was also very prevalent in the armed forces. When I served in the 1980s and 90s, all signs of segregation were effectively eliminated and everyone whom I had the honor to serve with was and remains a brother. While I do not deny that there existed (during my time in uniform) residual-yet-waning effects of racism within the ranks, I personally witnessed hearts and minds transformed as we pulled together as a team. It is difficult to fathom what existed during World War II in that Americans couldn’t serve together. Segregated units (for both African Americans and Japanese Americans) was the standard for the armed forces – with ground and aviation troops in particular. It was a terribly irony that any American would enlist to fight against tyrannical and horribly racist nations only to face returning home to racial separation and bigotry. As was with Branch Rickey and Jackie Robinson pioneering change within professional baseball, so too was were men like Nahem and others with the game within the ranks.

In respecting Mr. Dreier’s work and efforts and not to steal the thunder surrounding his book regarding Nahem, I will do my best to avoid giving anything away regarding his project. One facet of Peter’s work will center on Sam Nahem’s pulling together of the team which including the potentially controversial decision to include African American servicemen onto the team. Though some would assert that adding the likes of Willard Brown and Leon Day to the OISE rosters was the first instance of an integrated ballclub, instead it was part of the beginning of turning the tide for integration (Jackie Robinson, a WWII veteran and former U.S. Army officer and star of the negro leagues would sign with the Brooklyn Dodgers after the end of the 1945 major league baseball season). In the summer of 1944, Hal Harrison would join major leaguers the likes of Joe DiMaggio, Dario Lodigiani, Walter Judnich, Myron McCormick, Charles Silvera, and John Winsett on the 7th Army Air Forces baseball and Army All Star teams in the Hawaiian Central Pacific League.

The OISE All-Stars featuring Willard Brown (front row, 2nd from right) and Leon Day (far right, front row), both of whom are Cooperstown Enshrinees. Sam Nahem is in the back, far left (image source: Baseball in Wartime).

The ETO Series was a best three of five games that went the distance. The OISE All Stars were, by comparison to their competition, a cobbled together group of semi-pro, minor and negro league talent that faced off against the formidable Red Circlers who were stocked with two former major leaguers, Johnny Wyrostek and Herb Bremer along with six veteran minor leaguers (the 71st was so talented that the roster featured fifteen players who possessed professional league talent and played on minor or major league teams either before or/and after the war). Following the game 1 blowout of the OISE men, the series could have easily appeared to be a lopsided sweep with the Red Circlers plowing through their second consecutive serious, effortlessly (the 71st swept the champions of the 7th Army, the Blue and Greys of the 29th Infantry Division in three games, just a few weeks prior). 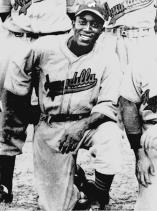 On the heels of the 9-2 rout on September 2, 1945, starting pitcher, Leon Day was given the task to turn the tide and did so tossing a complete game, 2-1 four-hit victory to even the series at a game a piece on September 3rd. The OISE team would claim the ETO championship before heading to Leghorn, Italy to take on the Mediterranean Theater champs, the 92nd Division. The Nahem, Brown and Day’s squad swept the 92nd routing them in three games, 19-6, 20-5 and 13-3. Day was a 10-year veteran of the Negro National League before entering the Army in 1943. Leon Day had compiled a 24-14 record with Baltimore, Brooklyn, Homestead and Newark before donning his OISE flannels after hostilities ended in Germany. By the time Day hung his spikes, he began a long wait from Cooperstown that would come 42 years later following veterans committee vote. Just seven days later, Day would pass away on March 14, 1995. Day’s OISE teammate and fellow Negro League veteran, Willard Brown would join him in Cooperstown eleven years later though Brown didn’t live long enough to see his election having passed a little more than a year after Leon.

For a collector of baseball militaria for the past decade, finding pieces pertaining to African Americans who donned the uniform of their nation and their unit’s flannels is beyond difficult and more towards the realm of impossible. In my collection are exactly two pieces and yet only one of them, a photograph, is a vintage artifact.

This PSA-authenticated signature of Leon Day is on an Official American League baseball with the Bobby Brown stamp. Since Day passed in 1995, this ball was signed, in my estimation, sometime in the early 1990s coinciding with the baseball memorabilia boom at that time.

Recently, I was able to obtain a signature of one of these two war veterans and members of Cooperstown. I received the authenticated Leon Day autographed ball much to my elation. Though the ball isn’t in line with what I collect in terms of uniforms, photographs, equipment and ephemera, it does fit well in that this veteran served as a member of the 818th Amphibian Battalion.

When I saw an auction listing for a group of two or three small snapshots that were seemingly removed from a veteran’s wartime photo album, I jumped at the chance to add it to my collection as one of the images showed a group of African American soldiers wearing flannels and army uniforms. The photo, though out of focus and poorly exposed, is (to me) an invaluable piece of history. When I shared the photo with a group of baseball collector colleagues, one of them called attention to who he suspected was a notable professional ballplayer in both the Negro and Major leagues.

When I acquired this nondescript snapshot of WWII African American servicemen ballplayers, I was excited just to have it in my collection. After learning that the image possibly depicted the first black pitcher to toss a no hitter in the major leagues, my excitement only increased.

Usually when I acquire vintage photographs, my first action is to clean and scan (at the highest resolution as is possible) them to create a digital copy of the image. From the initial scan, I begin to adjust and correct any exposure issues and then begin to repair damaged areas that may be present on the image’s surface. The most common repairs are the removal of foxing and cracks that occur with the aging of the silver oxide emulsion due to exposure to air and light. Since the scans are substantially detailed, I am afforded the opportunity to inspect the details in hopes of uncovering additional information that wasn’t previously known regarding the subject of the image. With this particular image, the lack of crisp focus and poor exposure settings, I was unable to discern anything that would lend to identifying the units, location or identities of the men pictured.

A close-up of the tall, lean ball player only seems to confirm the suspicion that he is “Toothpick” Jones.

When I read my collector colleagues remarks regarding the very tall, light skinned man (pictured second from the left) and that he suspected him to be “Sad Sam” or “Toothpick” Jones, a ball player who served in the Army Air Forces and went on to play in the Negro and Major Leagues. Jones was a latecomer to baseball having played football and basketball as a youth athlete. While stationed stateside in Florida, he began playing baseball for small tenant unit team due to the segregation that existed with his command’s team. As it turns out, his team was actually the more competitive squad on which he played at first base and catcher, pitching occasionally.  Jones would pitch for 12 seasons in the major leagues (from 1951-1964) with six teams amassing a 102-101 win-loss record with a career ERA of 3.59. He led the league in strikeouts three times (1955 and ’56 with the Cubs and in 1958 with the Cardinals) and earned two trips to the Mid-summer Classic (1955 and in 1959 with San Francisco). His best season in the majors was with the Giants in 1959 when he posted a 21-15 record and 2.83 ERA, leading the National league in both wins and earned run average.

Sam Jones was with the Chicago Cubs for two seasons in the mid-1950s. In 1955, his first season with the team, he became the first African American to pitch a no-hitter when he blanked the Pittsburgh Pirates, 4-0 on May 12, 1955 (image source: nonohitters.com).

The likelihood that the man in my vintage photograph actually being “Toothpick” Jones seems to be considerable though there is no way for me to authenticate it as such. Regardless of the identities of the men in the image, the photograph is a cherished addition to my photo archive and will serve as a testament to the invaluable dedication and contribution these men made to their country and to the game. It is an honor for me to be a caretaker of such a treasure.

Posted in Baseballs, Hall of Fame Players, My Collection, WWII