During World War II, more than four million Americans served in the U.S. Navy (according to the Naval Heritage and History Command, between December 7, 1941 and December 31, 1946, 4,183,466 (390,037 officers and 3,793,429 enlisted) served in some capacity during the wartime period.  The monumental shift of naval tactics that vaulted the Navy from ship-to-ship engagements to over-the-horizon and long-range fighting and the reliance upon the aircraft carrier and naval air forces created massive shortfall and resulting demand for highly trained and skilled aviators. Though the Aviation Cadet program (V-5) was established with the passing of the Naval Aviation Cadet Act of 1935, the program took center stage as the means of converting civilians into naval aviators in late 1942-early 1943.

Integral in the WWII Aviation Cadet Program were the Navy Pre-flight schools that were hastily established at four college campus locations: University of Georgia at Athens, University of Iowa at Iowa City, St. Mary’s College at Moraga, California and the University of North Carolina at Chapel Hill. With athletics figuring to be so prominent in the cadet training program, it is no wonder that high-caliber athletes and professional baseball players flourished both on the competitive field and as aviators. Besides sending America’s brightest and best into the seats of Navy fighter, bomber, scout and transport aircraft, these Navy pre-flight schools provided the nation with future leaders in science and exploration, business, sports and government, counting two future presidents, astronauts and members of professional and collegiate sports halls of fame.

In my pursuit of assembling a robust and well-rounded photographic archive of original vintage military baseball imagery, I have managed to acquire some fantastic pieces that shed light on the game and those who took to the diamonds on military installations and near the front lines.  One of my most recent acquisitions is reminiscent of the three photographs that were part of the estate of legendary Red Sox infielder and WWII Navy Pre-Flight cadet, John Paveskovich, known to baseball fans as Johnny Pesky.  This most recent vintage photograph featured four men posed in their Navy Pre-flight (Cloudbusters) home baseball uniforms, kneeling on the sidelines of Emerson Field at University of North Carolina.

Like the earlier image of Pesky posed with Ted Williams and another Cloudbusters player, this photograph shows three faces from sports that were, at the time, well-known in their profession. Buddy Hassett, a seven-year major league veteran first-baseman and outfielder (Dodgers, Braves and Yankees) who made three appearances for the Yankees in the 1942 World Series loss to the Cardinals is pictured among the four men. Hassett batted .333 and scored a run as he played his last major league games of his career before joining the Navy. The other, more well-known Cloudbuster, the team’s head coach, Glenn Killinger, was a 10-year minor league infielder serving as a player-coach from 1922-32. Killinger, in addition to averaging 111 baseball games played per season, found time to suit up for the Canton Bulldogs and New York Giants of the National Football League and the Philadelphia Quakers (of the first AFL) as a tailback. Killinger, previously a tailback for the Penn State Nittany Lions from 1918-1921 earned All-American honors in his final season along with earning letters in two other sports (baseball and basketball). Not one to sit on his laurels, Glenn Killinger split time between playing professional baseball, football and serving as a head coach at the collegiate level throughout the 1920s. By the mid-1930s, he was a full-time college football and basketball coach. When the need for physical education instructors and coaches at Navy Pre-flight arose, Killinger responded and received a commission as a lieutenant commander, assigned as the Cloudbusters’ head coach in 1944.

Both Hassett’s and Killinger’s signatures adorned the photograph along with a third autograph from one of the other players in the pose. More than 74 years of aging, decay and fading have reduced the clarity and visibility of the signatures rendering the third autograph nearly, though not fully illegible. I was able to discern the name “Thomas McConnell” along with the inscription (to Howie Haak, who he, Killinger and Hassett signed the photograph to and is pictured at the far right) which launched a concerted research effort to see if I could learn more about this ball player. A cursory peek into the listings of professional (major and minor league) ballplayers yielded nothing. As I continued my search, I shared my discovery with fellow collector colleagues with the hope that someone in that circle might have a clue. Within minutes, I was directed perform a cursory internet search for a monument at a St. Louis, Missouri high school that bore the same name.  Clicking on the very first link in the results directed my browser to a page on the John Burroughs School site that was created to honor Tom McConnell. In addition to a photograph of the monument was a photo of a middle-aged man who resembled the young man in the Cloudbusters photo accompanied by a brief narrative about the school’s former head football and baseball coach and athletic director who was killed by a hit-and-run motorist in 1970. 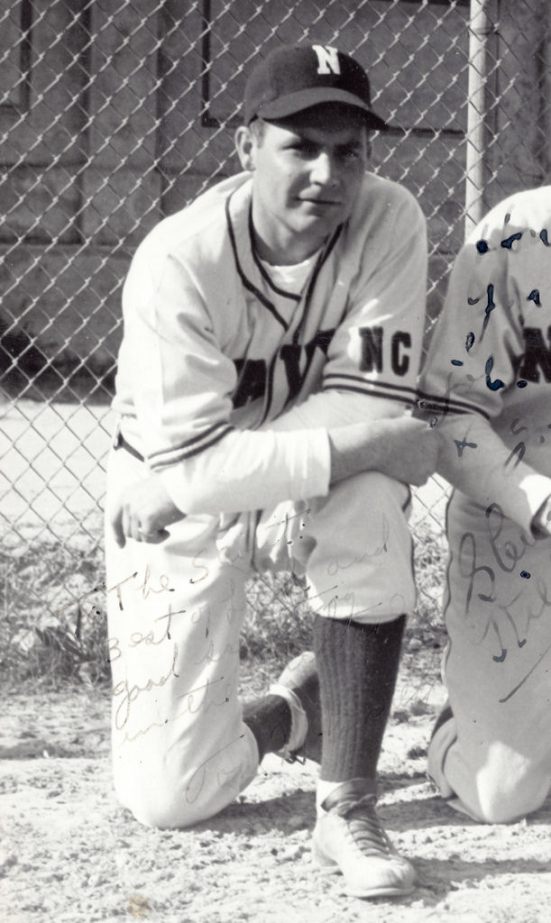 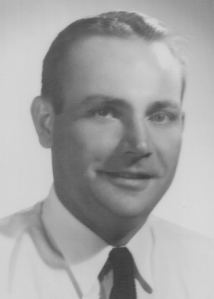 Not one to stop with the first results, I know had more information to bring to bear in deepening searches. Tom McConnell, was born sometime in 1916 or ‘17 and passed away in 1970 (in St. Louis). Taking this information, I was able to uncover a few more details about the former Cloudbuster ball player.  Thomas M. McConnell was born on Independence Day amid the Great War, July 4, 1916. According to the 1920 federal census, he was adopted by a St. Louis area dentist, Harry R. McConnell (a World War I veteran) and his wife, Katherine G. McConnell. He would be their only child. Tom would excel scholastic athletics, graduating from University City High School in 1935, departing for the University of Illinois.  According to the 1940 census, Tom was still living with his parents (along with his paternal grandfather) while working as an assistant coach in the Normandy Township schools, launching what would become his lifelong vocation.

As war was raging in Europe and the Empire of Japan was enshrouding the Western and South Pacific in fear and tyrannical rule, Tom McConnell married the former Ruth Funk on July 28, 1941 as he continued his coaching career with Clayton High School in the Clayton, Missouri school district. In less than five months, following the surprise attack on Pearl Harbor by the Empire of Japan, McConnell would see his country engulfed in war. On the day after Christmas of 1942, McConnell departed home for the U.S. Navy’s V-5 program (having enlisted on December 17, 1942) to serve as an instructor and a coach with the Cloudbusters. On February 6, 1943, Tom McConnell successfully completed his naval indoctrination at Chapel Hill (one of his classmates was future baseball Hall of Famer, LT Charlie Gehringer) and was ready to assume duties, training and teaching young cadets on their way to becoming naval aviators. By March 11, McConnell was promoted to the rank of lieutenant (junior grade) and was serving as a military arts instructor and was assigned as one of Glenn Killinger’s assistant baseball coaches, along with LT Buddy Hassett, helping to guide the UNC Pre-Flight cadets to a second consecutive Ration League title.  In the fall of 1944, McConnell transferred away from Chapel Hill and, as of yet, no records have surfaced that can provide insight on where he served for the remainder of his Naval career. According to the 1951 Naval Register, Tom McConnell was promoted to the rank of lieutenant on August 1, 1945, just five days before Little Boy was dropped by the 20th Air Force’s B-29, Enola Gay on the Japanese city of Hiroshima.

In a career dedicated to teaching and leading young people, McConnell returned to coaching high school athletics in St. Louis, presumably influenced by the wealth of professional talent both on his Navy Pre-flight rosters, coaching staff and fellow instructors. McConnell was, no doubt, heavily influenced by his fellow coaches such as Don Keppler, Glenn Killinger and Buddy Hassett, carrying the newly acquired expertise, teaching styles and philosophy to St. Louis where he coached football, baseball and basketball with Clayton, Normandy and John Burroughs high schools.

On a spring night, Tom and his wife, Ruth had been celebrating a joyous occasion with the wedding of one of his former students. While walking from the reception, the McConnells were crossing a street, bound for a follow-on function when they were struck by a vehicle, inflicting deadly harm. Ruth was severely injured but her husband, the beloved coach died at the scene. Witnesses of the incident reported that the assailant accelerated from the scene, leaving the two mangled bodies in the street. The crime remains unsolved.

In 2002, McConnell was honored by his high school alma mater, University City HS with an induction into their hall of fame. His citation reads, “McConnell’s coaching style was compared to the style of his former University City High School football coach and later colleague C.A. (Stub) Muhl. Both had well-drilled players who were ‘gentlemen with a ferocious desire to win the game and with a quiet acceptance of it when they did.’ It was with this style that McConnell ‘turned out excellent teams year after year.’”

Though this former Cloudbuster never took to the skies as a naval aviator, ascended to the highest public office of his nation nor broke the gravitational pull of the earth, McConnell, no doubt greatly influenced countless youth in and around St. Louis, Missouri.