Regular readers of Chevrons and Diamonds might be accustomed to terminology that is employed when describing the photographs that are part of our collection – several of which have been published within our articles. It may seem straight-forward to casual collectors but the pursuit of old photos is not as easy as it may appear at the surface. I have been around photography for most of my life with countless hours behind the viewfinder, in the darkroom and in post-processing within the realm of digital imagery. I have experience with photo-duplication (I.e. taking a picture of a picture) in order to create a negative as well as the with the process of creating an inter-negative from a color transparency (color slide) – both practices have been relegated to the artistic end of the photographic practice rather than within the mainstream of photography. 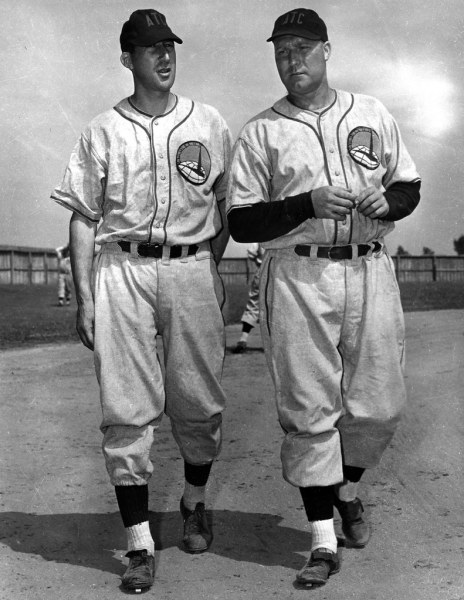 With the correct exposure revealing the details of the uniforms and player-identities along with framing and perspective, it is obvious that Harry Danning and Charles “Red” Ruffing were captured by a professional photographer.

Experience behind the shutter, navigating around in the darkroom and photographic editing does provide me with a measure of knowledge in recognizing certain aspects and details with photographs but extensive time spent with inherited vintage family photographs (ferrotypes, carte de viste, cabinet cards, real photo postcards, contact prints, etc.) throughout my life provided me with an introduction to this sphere of the hobby and led to further research on the older photographic practices and processes that are long-since retired.

Despite my knowledge and experience in this arena, I am far from being a subject matter expert however am fully capable of protecting myself from both over-paying or being taken by unscrupulous or neophytic sellers.

The precipitation for this article stems from the constant dialog among my colleagues surrounding the need to be able to knowledgably navigate the waters of vintage sports (specifically, baseball) photography collecting. With terms bandied about such as “Type-1, Type-2, Press, News, Wire service, Telephoto, etc.” understanding these terms poses as much of a challenge as it is in determining what a prospective vintage photo might be. Education in this area, while not fool-proof, can certainly provide collectors with enough tools to perform enough due diligence to make the right pre-purchase decisions.

The trend for articles published on Chevrons and Diamonds is anything but brevity and due to the significant amount of material that will be covered, the decision has been made to approach the various aspects of this subject through a series of articles.

At the risk of the following being misinterpreted as an outline (the list is merely a guide for what will be discussed in future articles), such focus areas will included covering the differences between professional and amateur photographs:

When discussing professional photographers, we will spend some time touching upon some of the well-known shutter-snappers such as:

What should collectors look for in analyzing a print? We will discuss some of the basics that contribute to the value of vintage photographs such as:

Terminology is one of the more difficult topics in this arena due to the subjectivity and the randomness with which they are applied by collectors, sellers, graders and auction houses. Without attempting to re-author the terms, we hope to provide some semblance of standardization and meaning to otherwise (seemingly) useless nomenclature.

Aside from the dimensions of the image, there are several glaring details that indicate that this photo was shot by an amateur photographer. Unfortunately, no caption or notes were written onto this photo.

Though this photo of two USAAF players at Perris Hill Park, San Bernardino, California) was taken on the field, the size, composition and exposure are amateur photographer hallmarks.

As the saying was first written, “one picture is worth a thousand words” which for a collector, only means that they are worth even more. The measure of detail that is captured on film (the uniforms, hats, spikes, gloves, location and venue that are depicted within each image is nothing short of treasured.

Though this print compares in size with an amateur snapshot, the image was captured by a professional. “In a beef with the pitcher.” Shown here are Buster Mills, Sid Hudson, Howie Pollet and Chuck Stevens. Lt. “Buster” Mills, manager of the 58th Bombing Squadrons Wingmen, holds an implement not commonly seen on domestic baseball diamonds.

How does one determine the difference between a professional photograph and of one captured by an amateur?

Certainly, there are more characteristics that one can employ to distinguish between these images with the most significant one being common sense. Stay tuned for the next segment in this series.

Posted in Ephemera and Other Items, My Collection, Vintage Baseball Photos