Striking the Drum: a Mid-1940s Jersey from the USS Timbalier

On the heels of the acquisition of a lifetime, a uniform group that formerly belonged to a USS Phoenix (CL-46) veteran, it is hard to imagine that there are other jerseys that could draw our attention. Granted, there is a bit of a comedown once such a treasure is added to our collection. It does not diminish our interest in seeking out other service team artifacts, however.

When a colleague turned our attention to an auction listing for a vintage flannel jersey that he was considering for a project, its design was instantly recognizable as it was consistent with wartime Navy ship baseball team uniforms. Details such as the color, font and size of the athletic felt lettering and how they are arched across the chest of the jersey align precisely to what we have seen on other ship team jerseys. From the cut of the torso, the set-in sleeves and the thin navy blue soutache that encircles the collar and adorns the button-placket (and sleeve cuffs) to the cat-eye buttons and the sun collar, this jersey is reminiscent of many other wartime U.S. Navy baseball uniform tops used for warship teams.

In performing some due diligence for my colleague, we were not at all certain that the jersey was one of a Navy ship baseball team. A cursory search of the name on the jersey’s front returned scant results. Ranked third in the search results behind a nine-year-old oil and gas industry company and a Gulf Coast of Louisiana barrier island was the U.S. Navy warship bearing the name on the jersey. 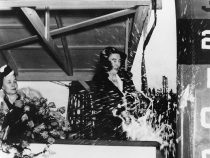 The ship, USS Timbalier (AVP-54), was a Barnegat-class seaplane tender that was named for Timbalier Bay, which lies to the north of Timbalier Island and is partially enclosed by its north shore. Timbalier Island (which is uninhabited), considered one of Louisiana’s barrier islands, is located 75 miles west of the mouth of the Mississippi River. The seaplane tender was authorized by Congress in the months following the Japanese attack on Pearl Harbor. AVP-54’s keel was laid on November 9, 1942 at the Lake Washington Shipyard (near present-day Kirkland, Washington) on the eastern shore of the large lake. Construction proceeded slowly at the small shipyard, prompting Navy leaders to transfer the unfinished vessel to Puget Sound Navy Yard (known today as Puget Sound Naval Shipyard in Bremerton, Washington) in early 1944. Sixteen months later, the vessel, still incomplete, was moved back to the Lake Washington Shipyard facilities and would not be completed until the spring of the following year, eight months after the unconditional surrender of Japan and the end of World War II.

Timbalier (AVP-54) nearest pier 6-A and inboard of Valcour (AVP-55) at Puget Sound Navy Yard, 10 January 1945. The two AVPs were built at Lake Washington Shipyards, Houghton, WA. and towed to the Navy Yard for completion. Timbalier was eventually towed back to the Lake Washington Shipyards and completed there while Valcour was completed at Bremerton Navy Yard. The photo is taken from the flight deck of USS Ticonderoga (CVA-14). That ship was having 20mm galleries relocated from the aft end of the flight deck to the sides (US Navy Photo).

Most of the Navy ship jerseys that we have seen in vintage photographs, other collections or listed for sale), aside from featuring the ship’s name spelled out in athletic felt lettering across the chest, also include “U.S.S.,” indicating the vessel as the Navy’s “United States Ship”. This Timbalier jersey lacks the designation. One may ask, “In the absence of the specific designation, what then indicates this jersey as originating from the USS Timbalier?” 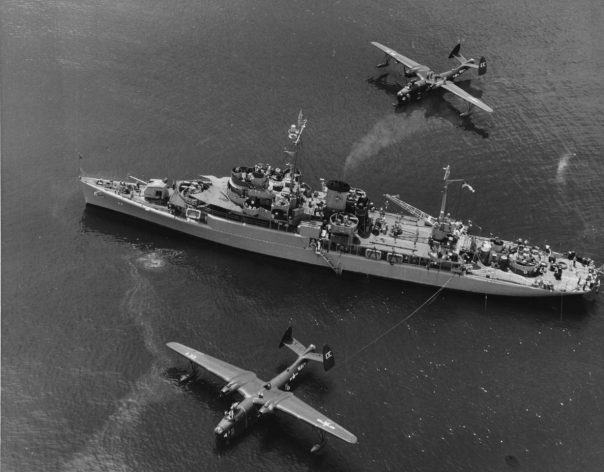 Directly obtaining an artifact from the person who used or wore it is the most ironclad provenance that one can receive. In the absence of such proof, analysis and research is required to either rule out or validate the authenticity of an item.  There are several aspects of the Timbalier jersey that we analyzed that helped us arrive at our assessment that this jersey was from the ship.

The cut of the body of the jersey is aligned with others from the early-to-mid 1940s with such features as nine-1/2-inch long, set-in sleeves and a tall sun-collar.  The gray wool is heavy and substantive. The five buttons are of the larger, convex cat eye variety that were common on many wartime service team baseball jerseys. The navy blue athletic felt lettering and numerals are applied with a straight stitch.

Given these design factors alone, the jersey falls into line with the 1945-46 timeline and certainly conforms to the date when the ship was commissioned. The information on the manufacturer’s tag, “Northrop Sports Shop Inc., Norfolk, Virginia”), in our opinion solidifies the assessment that the jersey is from the USS Timbalier. After the ship was placed into commission, she began her shakedown as she made her way south from Washington State. Following stops in California, the Timbalier headed for the East Coast, where her homeport assignment was located, by way of the Panama Canal. USS Timbalier spent three months at New York Naval Shipyard (formerly known as the Brooklyn Navy Yard) for her post-shakedown maintenance before transiting to her home port at Norfolk.

Since the ship most likely had her Norfolk, Virginia, home port assignment prior to her commissioning date, it is a safe assessment that the ship’s athletic equipment was sourced through the Norfolk Navy supply system. Furthermore, the lack of the “U.S.S.” lettering is possibly due to acquisition and initial use predating the ship’s date of commissioning (when she became a United States Ship).

Another aspect of research that must be considered is that the jersey could have been used by a collegiate, scholastic or even a semi-professional team, which prompted a considerable effort to find any possibilities. Conducting numerous searches through several research resources, we were unable to locate even a remote possibility of an alternative baseball team.

Heavily discolored by dirt and nicotine, the USS Timbalier jersey has a brown appearance rather than gray (image source: eBay photo).

In this side view, the vertical brown stains are quite visible as they are significantly darker than the overall discoloration of the jersey (image source: eBay photo).

This view of the back of the USS Timbalier jersey shows greater discoloration on the upper portion (image source: eBay photo).

Upon withdrawing our newly acquired USS Timbalier jersey from its shipping packaging, it became readily apparent that it required cleaning. The gray wool flannel was discolored to a brown tone with heavy streaks of soiling. The sun collar had even darker brown staining from body oils and sweat due to contact with skin at the player’s neck. The odor that was emanating from the jersey was an overpowering musty smell combined with old tobacco fetor. 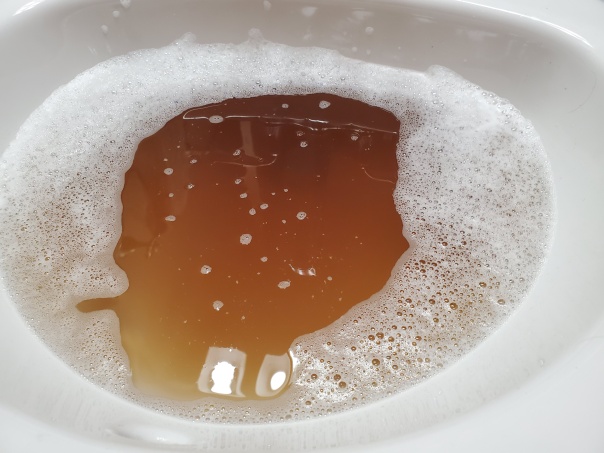 After just a few hours of gentle agitation and soaking, the cleaning solution was heavily discolored and clouded by the filth released from the fibers of the USS Timbalier jersey

Following the same cleaning procedure that we employed for our heavily-soiled USS Phoenix jersey, we immediately submersed the USS Timbalier jersey into the proper mixture of warm water and delicate-textile cleaning solution. Almost as soon as the jersey entered the liquid, the dirt began to release from the fibers, causing the soapy-water to discolor and grow cloudy. After nearly four hours of soaking and gentle agitation, the water was so discolored that our plans needed to be modified. Rather than letting the jersey soak overnight in the filthy solution, the decision was made to pour out the dirty water, rinse and wash a second time.

Showing the button placket, narrow soutache and the athletic felt lettering, all of the features affirm our age-assessment of this jersey as being made in the mid-1940s.

This view shows how the soutache encircles the collar and disappears beneath the button placket. The navy blue athletic felt lettering is applied with a WWII-era straight stitch.

Applied with commonly-used WWII-era straight stitching, the condition of the athletic felt lettering is outstanding.

After being overnight in the solution and getting a thorough rinsing, the jersey was significantly improved, as was discernible by both the visual and olfactory senses. The flannel was laid out flat on towels beneath a ceiling fan to dry to a slight dampness before moving outdoors for final air-drying. 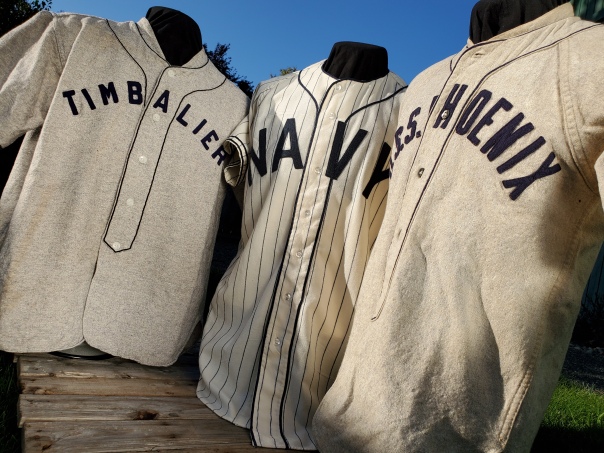 With the drying complete, the USS Timbalier flannel is now ready for display among our other baseball and military artifacts. With four Navy baseball jersey additions in the same number of months, we are astounded by the flood of these items to the collector market.